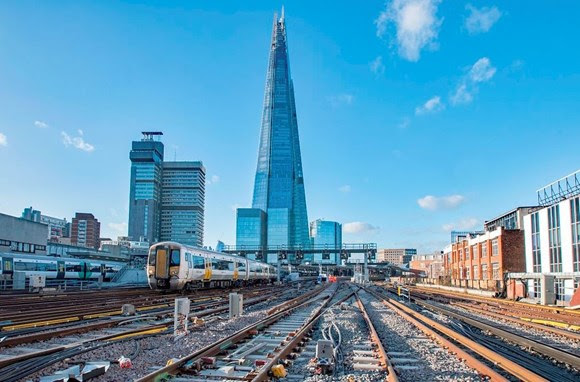 All tracks surrounding landmark London Bridge station are now in place and ready for 2018. Network Rail’s Thameslink Programme has reached another crucial milestone ahead of the New Year.

The infrastructure is now in place around the striking new station, ready to be brought into use on 2 January 2018 following ten days of major re-signalling, during which there will be major changes to services and line closures affecting London Bridge and other London stations.

Since work began in 2009, Network Rail has renewed and remodelled over 40km of railway that links London Bridge and Blackfriars to Lewisham and strengthened 35 bridges to support the tracks. The final piece of the puzzle was put into place on a foggy day in November, when Network Rail fitted the final set of points – which allow trains to move from one track to another – in Bermondsey. This was the last of 154 sets of points to be installed and it now connects the tracks through platform 4 at London Bridge, which will be used by Thameslink services from May 2018, to the flyover at Bermondsey.

Mark Somers, railway systems project director for the Thameslink Programme, said: “I am thrilled that we have successfully completed what has been the most complex track realignment the UK’s railway has ever seen. By untangling the tracks surrounding London Bridge, we will provide more reliable, more frequent journeys for passengers ever before. The Thameslink Programme is a vital part of Network Rail’s Railway Upgrade Plan and I am very proud of the work we have done.”

Wendy Preston, commercial and supply chain manager for Vossloh Cogifer UK, which supplied 149 of the 154 sets of points used on the Thameslink Programme, said: “We have worked on the London Bridge scheme for the last five years, supplying 149 of the sets of points that have been used on the Thameslink Programme. It has been a challenging project but we are very proud to have been a part of such an amazing achievement.”

Between 23 December and 1 January there will be no trains to or from Charing Cross, Cannon Street, Waterloo East, Farringdon and other major London stations, plus no Southeastern services at London Bridge, while Network Rail carries out extensive re-signalling and continues to work on the redevelopment of London Bridge station, ahead of the final third of the brand new concourse and platforms 1 – 5 opening on 2 January.

Passengers are advised to check before they travel and make detailed travel plans by visiting www.thameslinkprogramme.co.uk/2017.

After the Christmas and New Year period the countdown to the completion of the transformation of London Bridge station begins. There will still be work to do in the station throughout 2018 but this will be completed during evenings and weekends, rather than working days. Once complete, London Bridge will be a modern, spacious and fully accessible station. From May 2018, Thameslink services will be returning to London Bridge for the first time in over three years, serving a range of  new destinations.

Picture: All tracks surrounding landmark London Bridge station are now in place and ready for the New Year

The headquarters of a design practice, located on a street a stone's throw from The Shard and the redeveloped London Bridge Station, provide a stylish example of...