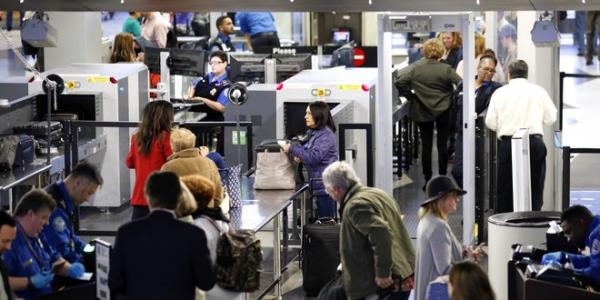 It has been reported that the security services believe that ISIS may have and found a way to hide explosives within electrical devices such as laptops and laptops so they can't be detected by current airport security scanners.

It is this opinion that has led to the UK and the US and other countries from banning such devices on planes coming from a number of countries.

Meanwhile, new data from YouGov Omnibus shows that flyers’ perception of the inconvenience of such measures increases as their sense of necessity declines.

The research was conducted among more than 1,500 British adults who have flown in the past ten years. It shows that there are large differences among flyers about the perceived necessity of current airport security restrictions.

While the overwhelming majority of travellers believe measures such as scanning hand luggage (95%) and full body scans (84%) are necessary, this is not the case for other safety precautions. Only around two thirds of flyers believe placing toiletries in clear bags (68%), limiting the volume of liquids in hand luggage (67%) and removing shoes (65%) are necessary.

But as the perceived necessity of the measure declines, the sense of inconvenience to travellers increases. Although only about one in seven (15%) flyers believe having hand luggage scanned to be a hassle, this figure rises to more than four in ten when it comes to removing shoes (43%) and limiting liquid volumes (46%).

The fast turnaround research follows the announcement from the UK and US governments that they have banned various electronic devices from being carried as hand luggage across several routes. The majority of the responses were collected after the terrorist incident in Westminster.

When it comes to additional measures, the public is so far unconvinced by their necessity and divided about their convenience. While just over half (56%) of flyers believe the restrictions on laptops and tablets in hand luggage are needed, a third (33%) think they are not. Travellers are almost evenly split about how much bother it will cause them, with 50% believing the measures are inconvenient and 47% believing they are not.

Picture: Attitudes to general security at airports and newly introduced measures has been the subject of a Yougov survey

Many people (clearly not all given the results of this study) are often very protective of their laptops, tablets and smartphones. Yet, according to a new study by...