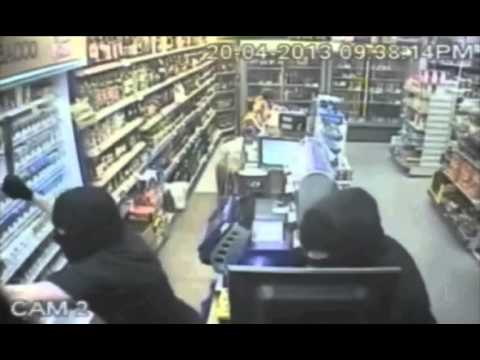 Police have released CCTV footage of the moment two armed robbers charged into a local store in Salford, Manchester before assaulting a shop worker with a machete. The worker was behind his counter when the two masked men entered the shop. Swipes were repeatedly taken at him with the weapon.

The men left the store with cash from the till and cigarettes. Police have condemned the ‘appalling’ level of violence during the theft and issued a public appeal in an attempt to gather information surrounding the incident. The shop worker is now recovering after surgery to a deep head wound.

“I am appalled at the level of violence and intimidation used by the men on an innocent shop assistant who was just doing his job,” claimed Detective Constable Derek Nellany. “The man was trying to protect the business but in doing so was brutally attacked. The offenders both wore very distinctive clothing and I ask people to have a good look at the footage. If you recognise the men in the images or the distinctive clothing, please contact police immediately.”

The man with the machete is described as white and aged between his late teens and early twenties. He was wearing a facemask and black top during the incident, with a thick, light-coloured stripe down both arms, a white T-shirt and black trousers. The second man is described as white and of a similar age, wearing a blue hooded top with the words ‘California Pasadena’ in larger lettering on the back.

Another CCTV release shows the terrifying moment three masked men, armed with a machete and a hammer, robbed a branch of Subway. After threatening a female employee, the trio made off with around £300 from the sandwich shop shortly before closing time.

One of the men, wearing a Scream-style mask, stayed on the door of the shop, in Clayton, Manchester, while the other two men, who were armed, ran inside. While the hammer-wielding thief jumped over the counter, the man with the machete ran into the staff area.

The pair then surrounded a 25-year-old worker and demanded she give them cash or they would hurt her. One of the men lifted the machete above his head in a threatening manner.

The gang stole from the cash register before running out of the shop. There were no customers inside at the time of the incident and the woman was not injured.

Det Con Dave Berry said: "Unless anyone has been in a similar situation themselves, I don't think we can appreciate just how scared this woman must have been to have a machete threatened at her in this way by a man in a mask - and all just for a few notes from a till."

Picture: A still from CCTV footage of the moment two armed robbers charged into a local store in Manchester.