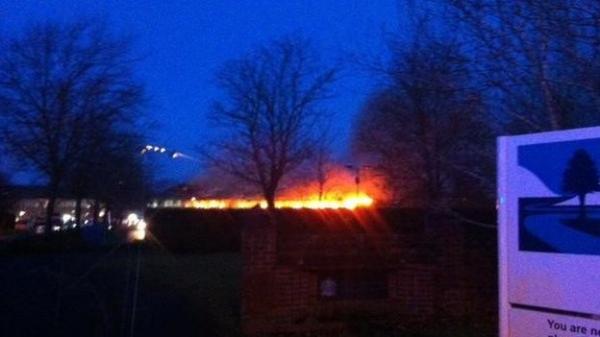 Oxfordshire's Fire and Rescue service dealt with three major fires in South Oxfordshire - one, at council offices, is as a result of a suspected arson attack.

At 03:20am this morning (Thurs 15 Jan), a call was received to a fire at the South Oxfordshire and Vale of White Horse District Council office at Crowmarsh Gifford. Thirteen appliances attended this incident - including two from Berkshire, a water bowser from WIltshire and a hydraulic platform from Buckinghamshire.

David Etheridge, Chief Fire Officer for Oxfordshire County Council's Fire and Rescue Service, said: "We are in the process of dealing with three major fires in South Oxfordshire, which occurred within a very short timeframe.

"These are on-going incidents and our firefighters are working hard to get the fires under control, with assistance from neighbouring Fire and Rescue Services at the South Oxfordshire and Vale of White Horse District Council office fire.

"At this stage I am unable to state what the causes of the fires were - this matter is currently in the hands of Thames Valley Police, with whom we are working in conjunction."

However, Council leader John Cotton told the BBC: "We believe it to be the result of arson, though that's not clear at the moment."

Mr Etheridge added: "We would advise the public to avoid the area, make diversions to your journey, anticipate disruption in the area and give yourself extra travel time.

British Transport Police have arrested a woman on suspicion of arson in connection with their investigations in to a blaze Arrest at Nottingham railway station. The...