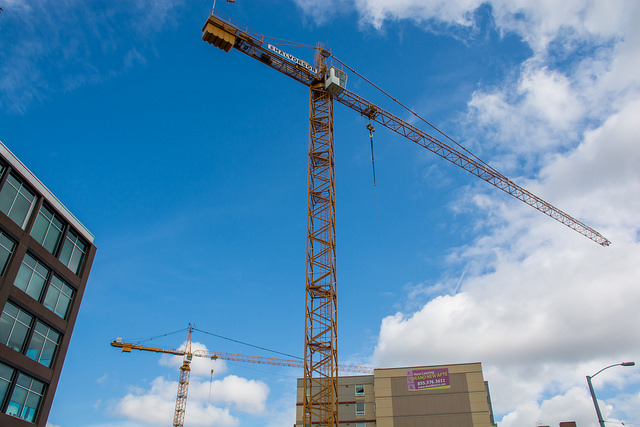 A construction company has been fined after an employee died after falling over 6 metres.

Speaking after the hearing HSE inspector Kate Leftly said: “Falls from height remain one of the most common causes of work related fatalities in this country and the risks associated with working at height are well known. If suitable edge protection had been installed, the tragic death of this employee could have been prevented.”

A structural steelwork installation company has been fined after an employee was injured when he was struck by a steel plate which fell from a crane.

Luton Magistrates’ Court heard how the injured person suffered a back injury while carrying out work on a new metal staircase under construction. The task involved using a crane to lift a steel sheet attached to a magnet, but the sheet became detached from the magnet, and fell striking the injured person on the back. The worker fractured his spine and has been unable to continue working as a steel fixer.

An investigation by the HSE into the incident which took place on the 10 December 2015 at the University of Bedfordshire, Luton Campus, found the company failed to ensure that the lifting equipment was of adequate strength and stability for each load. Whilst the safe working load was 1000kg the magnet had to be de-rated to take into account the thinness and the length of the metal being lifted. The company also failed to ensure that the lifting operation was planned by a competent person, appropriately supervised and carried out in a safe manner.

Tubular Erectors Limited of Bletchley pleaded guilty to breaching Regulations 4 and 8 (1) of the Lifting Operations and Lifting Equipment Regulations 1998. The company has been fined £32,000 and ordered to pay costs of £3444.80 and a victim surcharge of £120.00

After the hearing on Jan 19, HSE inspector Samantha Wells said: “This incident could so easily have been avoided by simply implementing the correct control measures and safe working practices. Companies should be aware that HSE will not hesitate to take appropriate enforcement action against those that fall below the required standards.”

A specialist scaffolding contractor has been fined after an employee suffered serious injuries.

Derby Magistrates’ Court heard how, on 22 February 2016 at a site in Chaddesden, a 24-year-old employee, Lee Gaskin was injured during the loading of bins of scaffold fittings onto a lorry using a Hi-Ab lorry mounted crane. The Hi-Ab arm knocked him from the bed of the lorry to the ground and he suffered significant injuries to his arms.

Benchmark pleaded guilty to breaching Regulation 8(1) of the Lifting Operations and Lifting Equipment Regulations 1998. The Company was fined £40,000 and ordered to pay full costs of £1,968.63 and a Victim Surcharge of £170.

Speaking after the hearing, HSE inspector Katherine Blunt said: “This was a very serious and wholly avoidable incident, caused by the failure of the company to plan and implement safe systems of work, for the loading of scaffolding parts on to the lorry. This incident could so easily have been avoided through the company properly planning the lifting of scaffolding parts onto the lorry, giving clear instructions for employees to follow, and having a competent person identified as Supervisor. This would have ensured the lift was carried out in a safe manner.”

The case was heard on January 18.

Also on January 18, the principal contractor and site manager of a construction site in Derby city centre were sentenced after workers were exposed to asbestos during refurbishment work.

Derby Magistrates’ Court heard how, on or before 5 January 2017, at the St Peters Churchyard site, labourers removed asbestos insulating board (AIB) ceiling panels from a store room, work which should have been completed by a licensed asbestos removal contractor under fully controlled conditions.

An investigation by the HSE found that M&S Developments (Bemrose Court) Limited were the Principal Contractor for the site and Adam Campbell was the site manager (operating as Kynersley Management Services Limited). Work was taking place to convert the former office buildings into apartments.

An asbestos refurbishment survey completed prior to construction work starting clearly indicated that the lower ground floor store room contained an asbestos insulating board (AIB) ceiling. During construction work this AIB ceiling was accidentally damaged and the site manager instructed two young labourers to remove approximately 4-6 square metres of it. Suitable asbestos control measures were not in place and the workers involved were not trained in asbestos removal.

Following the involvement of HSE in January 2017, a licensed asbestos removal contractor was brought in to clean the area. Asbestos containing floor tiles located around the site were also identified as at risk of damage from the construction work and arrangements were made with the principal contractor for these to be removed under controlled conditions by trained staff.

The investigation found that the principal contractor and their site manager failed to suitably manage the site asbestos containing materials. They failed to ensure that the asbestos containing materials (ACM) identified in the asbestos refurbishment survey were removed prior to any potential for disturbance during the construction work and the site manager failed to respond appropriately once the AIB ceiling had been accidentally damaged in the lower ground floor store room.

Adam Campbell pleaded guilty to breaching Section 3(1) of the Health & Safety at Work etc. Act 1974 via Section 37 in his role as a Director of Kynersley Management Services Limited. He was given a community order to carry out 120 hours unpaid work and was also ordered to pay costs of £1,531.66.

Speaking after the hearing, HSE inspector Andrew Bowker said: “This incident could so easily have been avoided by the duty holders simply carrying out correct asbestos control measures and safe working practices.

“Companies and individual site managers should be aware that HSE will not hesitate to take appropriate enforcement action including prosecution against those that fall below the required standard for managing asbestos containing materials during refurbishment work. Most types of asbestos containing material work (ACM) require a licensed removal contractor with suitably trained and licensed workers.”

Picture: For illustration purposes only. Cranes and other lifting accidents, falls and asbestos exposure have all led to convictions since January 18