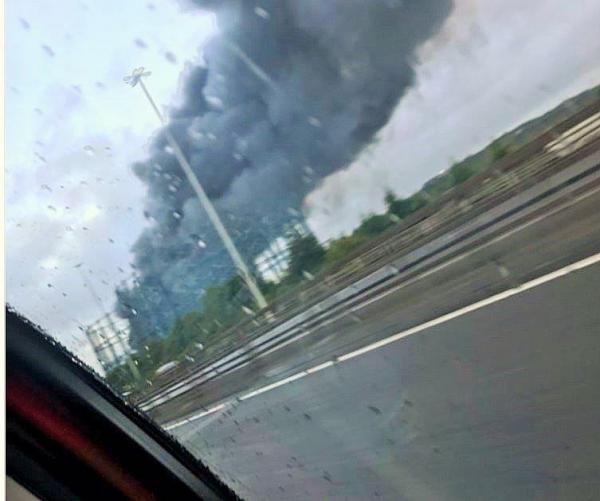 The massive Blochairn fruit market in Glasgow caught fire on the morning of Thurs Aug 17. 400 workers who had just signed on for their early hours shift were evacuated at 3:45am as the blaze took hold.

Crew from Scotland Fire Brigade were expected to at the scene all day damping down after the fire was brought under control by twelve fire engines plus aerial appliances involved. 70 firefighters were originally involved.

Local residents reported explosions (presumably a gas main) at about 5:00am but this has not been confirmed by the fire service. Plumes of smoke could be seen from miles around. More than 90% is said to have been engulfed.

Scottish Fire and Rescue’s deputy assistant chief officer John Joyce said at 6:00am: "The operation is dealing with an extensive and complicated fire in difficult conditions for our firefighters. Crews are using high powered hoses to tackle and contain the flames."

A Police Scotland spokesperson told ThisWeekinFM: Although the Brigade have high powered hoses here, problems with mains water pressure means they have not been as effective as thy should.”

Three hours after the blaze broke out it was still raging.

An investigation in to the cause will be underway as soon as the building is deemed safe to enter.

Picture: With thanks to Graeme Farrell Twitter on bus on way to work

The Leader of Glasgow City Council, Cllr Susan Aitken, has given an update on the Glasgow School of Art fire and the contingency measures put in place - and also gave...

Burnt Oak Ten fire engines and 72 firefighters and officers were called to a fire in Watling Avenue in Edgware. A single storey workshop at the back of a row of...

Ten fire engines and around 70 firefighters and officers were called to a fire in Camden Lock Market at just before midnight on Sunday evening (July 9). An aerial...

A fire in a basement on London's Oxford Street might have been small in intensity but turned-out to be large in terms of disruption but not quite so disruptive as the...

The London Fire Brigade has had another busy week as temperatures rise and call-outs to a variety of commercial property fires keep coming. Thursday May 25 saw a fire...

Six fire engines and 35 firefighters and officers from Soho, Chelsea, Euston and Lambeth rushed to reports of smoke issuing from the basement of a hotel on Piccadilly at...