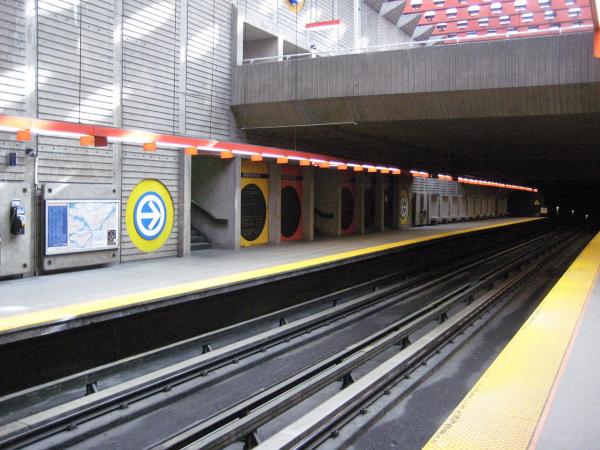 Préfontaine is a metro station on the Green Line of the Montreal Metro rapid transit system operated by the. Société de transport de Montreal (STM).

Located in the district of Hochelaga-Maisonneuve, it originally opened on. June 6, 1976 for the Montreal Olympic Games as part of the extension of the Green Line to Honoré-Beaugrand. Designed by architect Henri Brillon, it is a regular side platform station built partly within a tunnel that features a large open area entrance and mezzanine. The original design was centered on delivering vast quantities of natural light to fill the mezzanine area and reach down into the tunnel.

The station renovation objective was to keep the look and feel of the original 1976 design while completely upgrading and replacing the broad expanse of glass and skylights. Architect, Provencher Roy Associés Architectes needed a skylight provider with the expertise to seamlessly match complex esthetic elements in addition to ensuring arduous performance requirements.

Unicel was selected as a candidate for the project. Its skylight system was tested for yield performance, resistance to water infiltration, and its ability to absorb the huge piston effect which is produced by trains entering and leaving the station.

Unicel’s option resulted in skylight systems that could be easily installed without additional field cutting or onsite modification requirements.

Lighting up the Performance Standard

The UK specialist lighting manufacturer believes it is setting the standard for quality and price performance with a range of LED tube lights for fluorescent retrofit...

Trilux has launched its New Light 2013 catalogue which features over 1,000 pages of indoor and outdoor lighting options. It provides detailed product information that...