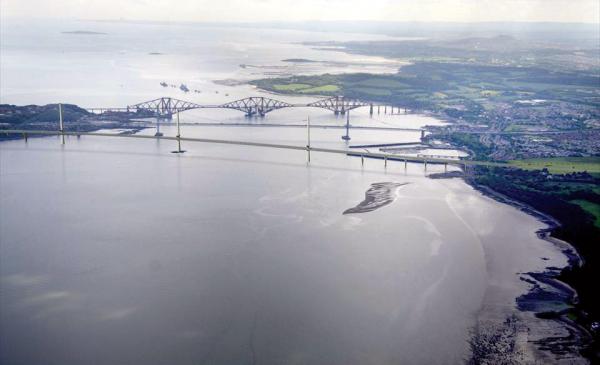 All work at the Queensferry Crossing has been suspended on both the £1.4bn construction project and the educational centre that runs alongside it as an investigation into how a man died moments after observing a silence for Workers memorial Day begins.

According to the BBC, the a 60 year old man is thought to have been hit by the moving boom on a Giraffe crane on the deck of the north tower and died as a result of a massive blood loss. Another man was also injured and taken to hospital.

Work started in 2011 to create a second and alternative crossing of the Forth Road Suspension Bridge which is suffering from corroded cables.

The Unite union has called for the Health and Safety Executive to conduct a full and prompt investigation. The union reported that the worker, who was employed by the Forth Crossing Road Consortium, was working a spider crane when he was hit by the moving boom shortly after midday on Thursday April 28.

Pat Rafferty, Unite’s Scottish secretary, said: “Once again, a loved one has gone to work and will not return home. That is hard to swallow any day but on today of all days, on International Workers’ Memorial Day, when we remember those who have perished at work, this loss is especially poignant."

Bernard MacAulay, Unite's national officer for the construction sector added: “Thirty-five construction workers lost their lives last year and there were over 65,000 reported workplace incidents that led to ill-health. That means that around one in four of those who lose their life at work is a construction worker. Lessons must be learned because workers must be confident that they are working in safety, especially in construction which is already one of the most dangerous occupations in this country.

“There can never be any corners cut where health and safety is concerned. We need an urgent investigation into this tragic death at Queensferry but it is crucial that trade unions play a part in that process of establishing the facts.”

A Police Scotland spokesman said: "We are currently working alongside our partner agencies to investigate."