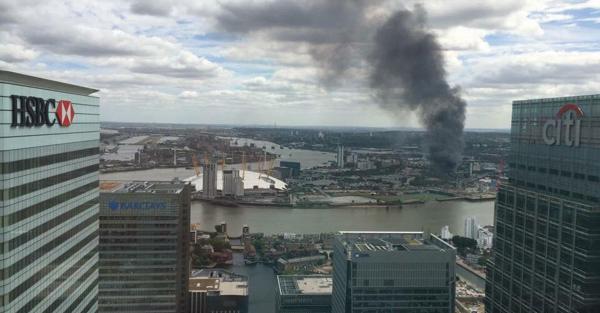 Police were called to Boord Street in London's Greenwich, by the London Fire Brigade at midday on Monday 8. London Ambulance Service was also called to the scene. One man, aged in his twenties was taken to an east London hospital where he remains in a critical condition.

The blaze was so large that it was seen from across London and by Tuesday 9, four fire engines and around 20 firefighters and officers were still on duty at Tunnel Avenue - the Blackwall Tunnel (a major Thames crossing point) had been closed through Monday.

At the height of the blaze 15 fire engines and around 100 firefighters were tackling the fire which saw the majority of a nightclub alight. Crews wearing breathing apparatus rescued a man from the burning building and after being treated at the scene by London Ambulance Service for burns the man was taken to hospital by London's air ambulance.

An industrial warehouse and scrap paper processing plant comprising of a yard and a number of outbuildings were also involved along with around 40 pallets of paper. Some gas cylinders were also affected and a safety cordon was put in place until the cylinders were cooled.

The cause of the fire is under investigation by the Fire Brigade and the HSE while detectives from Greenwich CID are also investigating. Cordons are still in place.

Enquiries continue with investigators from the London Fire Brigade.

The Health and Safety Executive have also been informed.

On Sunday 7, four fire engines and 21 firefighters and officers were also called to a fire at a waste management and recycling yard in Edmonton, just outside London. Approximately 100 tonnes of construction waste was damaged by fire. The Brigade was called by a neighbouring business who saw smoke coming from the yard. One person was treated by London Ambulance Service before being taken to hospital. The fire is believed to have been caused by self heating within a pile of waste.

The Brigade was called at 1548 and the fire was under control at 1804. Fire crews from Edmonton, Tottenham, Southgate and Chingford fire stations were called to the scene.

Two other fires in and around London, though domestic, were of interest. One in a block of flats threatened to engulf nearby businesses whilst another (a flat and a restaurant) saw the extinguishing process complicated as solar panels mounted on the roof began to melt and emit noxious fumes.

Picture: The Greenwich night club and recycling plant fire closed the Blackwall Tunnel and could be seen for miles around. Arson is suspected. One man is fighting for his life. With thanks to Twitter's J Compton ‏@ArtistJCompton