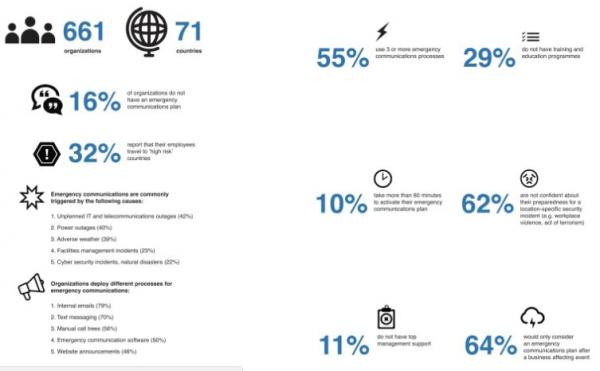 In a globally connected world, a great many companies have staff that travel both locally and overseas, making it more important to have an effective emergency communications plan in place in order to contact geographically dispersed staff during a crisis.

The Report did deliver the encouraging news that most 84 per cent of organisations surveyed do have some form of plan in place, although it did highlight that for those that don’t, two thirds felt that only a business-affecting event would incentivise them to develop one – most people would consider this too late.

Patrick Alcantara DBCI, Senior Research Associate at the BCI and author of the report, commented: “A robust emergency communications capability is a crucial, often life-saving, component of incident response. This becomes more important considering ever changing threats which often have an impact on the physical safety and well-being of employees and customers.”

Imad Mouline, Chief Technology Officer at Everbridge, (which sponsored the survey) said: “This year’s findings indicate that global businesses are increasingly aware that true resiliency is a company-wide initiative that involves taking accountability for the safety of all staff—whether they are located in the office, at home or on the road. While it’s not surprising to see shared interest in emergency communications across business continuity, IT, security, facilities and other disciplines, it’s clear that organisations are still seeking solutions to optimise their response plans for a mobile workforce and for the growing frequency and complexity of critical events and security incidents.

The 20 year old who climbed to the twenty-first floor of the Trump Tower and campaign headquarters of the man who would be king/president - Mr Donald Trump - is said to...