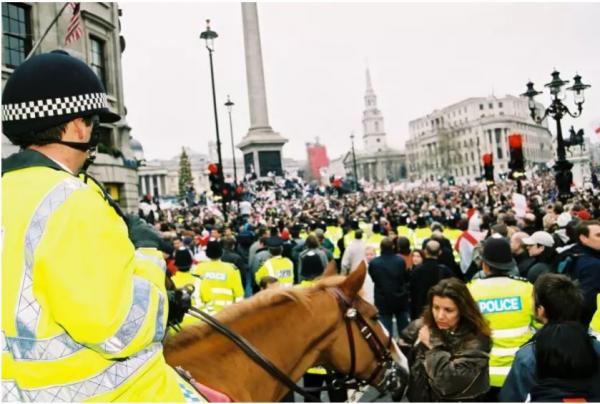 Ahead of the proposed ‘Million Mask March’ on Saturday, 5 November, conditions have been imposed on the event under the Public Order Act. The police say to help prevent serious disorder and disruption to Londoners.

Over recent years this event has caused significant disruption to Londoners with increasing amounts of anti-social behaviour, violence, damage to public property and businesses. Monuments have been criminally damaged, with attempts to take over buildings in addition to harassment of the public, motorists and attacks on police officers.

A significant policing operation will be in place for the duration of the event which is designed to prevent trouble from flaring and facilitate anyone who wishes to take part in peaceful protest. Dedicated teams of highly flexible officers will be on standby at key locations in the Capital.

Chief Superintendent Pippa Mills said: “We will always facilitate peaceful protest. However we have strong reason to believe that peaceful protest is the last thing on the minds of many of the people who will come along this year.

“Criminality at the event has increased year-on-year. Last year hundreds of Londoners on their way home from work or out enjoying an evening in the Capital, were harassed and intimidated by people causing them huge concern. Public property was damaged, businesses had windows smashed and police officers and horses came under attack.

"We have such serious concerns about a repetition of such criminal behaviour this year that we have made the decision to impose conditions under the Public Order Act on the event on Saturday, 5 November.

“Our message is simple: if you want to protest peacefully, that is your right and we want to work with you. If you commit criminal acts and breach the conditions of the event - that is not peaceful protest - and you are liable to be arrested.”

Any static assembly held can only take place at the following locations:

Trafalgar Square - in the barriered area on the East Footway of Whitehall, opposite Downing Street (known as Richmond Terrace); and in the area in the centre of Parliament Square (known as Parliament Square Gardens). Any assembly held at any of these three locations will start no earlier than 18:00hrs and conclude no later than 21:00hrs.

The participants must follow the directions of a constable even if the route is varied. There will be no motor-vehicles as part of the procession.

Any person in breach of these conditions is liable to be arrested.

Out on a limb

A legs and arms from shop mannequins have been piled-up outside the Russian embassy in London in protest at Russian bombing in Syria. Embassy officials have called on the police because of fear the demonstration could turn ugly.

The street entrance has been blocked and two people had chained themselves to railings on Thursday 3. Protesters also blocked the embassy phone network with constant calls. A Twitter campaign says the limbs represent the injuries suffered by the people of Aleppo. 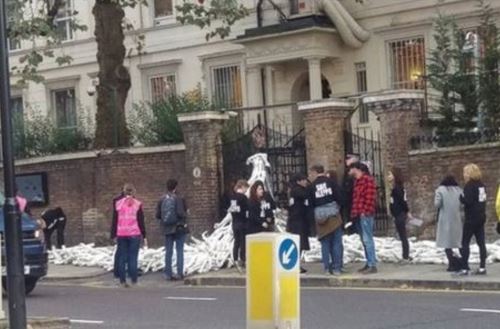 Picture: The Million Mask demo takes place at the weekend starting in Trafalgar Square and the Syria Campaign and Syria Solidarity UK have blockaded the Russian embassy in London