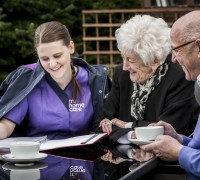 MiHomecare, one of the UK's biggest providers of care to elderly and disabled people, is said to be paying workers less than the minimum wage, an internal company document leaked to Corporate Watch.

Owned by Mitie, MiHomecare is claimed also to be scheduling home visits with no travel time in between, meaning carers have to leave appointments early.

Mitie has countered this charge by stating that its workers receive at least the minimum wage for the care work that they do. However, legally carers should also be paid for the time it takes to get from one visit to the next. An internal analysis of pay rates shows that many MiHomecare workers are not being paid for travel time and as a result are earning less than the minimum wage, once this is included.

The leaked document, entitled MiHomecare – National Minimum Wage Review of Penarth Branch considers how to respond to an HMRC investigation into two of the company's Welsh branches. It gives a breakdown of unpaid travel time for 44 members of staff in the Penarth branch for the week starting 22 September 2014, and estimates they could be owed as much as £80,000 over three years. According to Mitie's latest annual report, MiHomecare has 6,000 employees working out of 57 branches.

The document does not comment on whether other MiHomecare branches include travel time in carers' pay but says that there is no system in place to check minimum wage rates are paid across the business: ‘[MiHomecare] does not have a common audit or assurance process for [National Minimum Wage] compliance.’

MiHomecare is the fourth biggest homecare services company in the UK, providing care for 10,000 people in England and Wales. Over 75% of the company's revenue comes from the public sector, with local councils paying for the majority of home visits. MiHomecare made an £8.2 million profit in 2014.

Picture: MiHomecare has been accused of not paying its workers the national minimum wage following a disclosure of a document supplied to Corporate Watch.