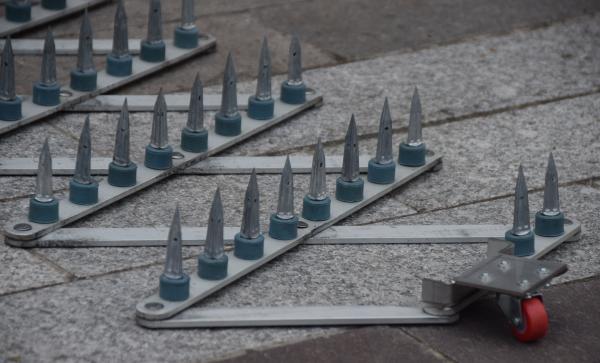 The police were called at 10.52am to reports that seven suspects had smashed their way into the jewellers brandishing weapons, including knives, before making off on mopeds with a large amount of items. Officers arrived on scene at 11:00am.

No one was injured during the incident. No arrests have been made.

Officers are continuing to investigate, including speaking to witnesses, viewing CCTV from the surrounding area, and carrying out enquiries at businesses in the area.

Detective Inspector Sam Toprak from the City of London Police Major Crime Team said: “We are treating this incident extremely seriously, as we do all incidents of this nature,and we are liaising closely with our colleagues at the Metropolitan Police in order to identify those responsible.”

City of London officers regularly visit retailers within the City to provide reassurance and advice on things they can do to protect themselves.

The Metropolitan Police were called again at 5:00pm on Monday Dec 4 to another moped-enabled crime after a woman reported that four suspects on two mopeds had stolen her mobile phone.

Officers were subsequently called to further offences in the area, and have since established that there were at least 24 victims.

None of the victims reported that they had been injured.

Following one of the offences, officers were authorised to deploy a 'stinger'. The suspects fled on foot but officers were able to recover a moped which is currently being forensically examined.

Detective Inspector Greg Coates, from the Central North Command Unit, said: "I am appealing for anyone who saw any of these thefts to contact police. I would also like to hear from anyone who may have filmed the offences on their mobile phones or dash cams to come forward.

"Last night, we successfully deployed a stinger and were able to recover one of the mopeds. This is a new tactic that has been rolled out across London as part of our continued efforts to tackle scooter-enabled crime."

Be aware of your surroundings at all times and keep your personal property secure.

Don't text while you're walking as you won't notice potential thieves approaching.

Try going hands free or stand away from the roadside close to a wall so no one can come up behind you.

Your device comes with a range of security features, such as keypad locks and remote data wiping. Make sure they are all activated to stop thieves from accessing your device and personal data. .

Know how to identify your phone and laptop if it's stolen. .

Find your IMEI number by dialling *#06# from your phone.

Picture: A moped from a series of moped muggings has been recovered after it was 'Stung'