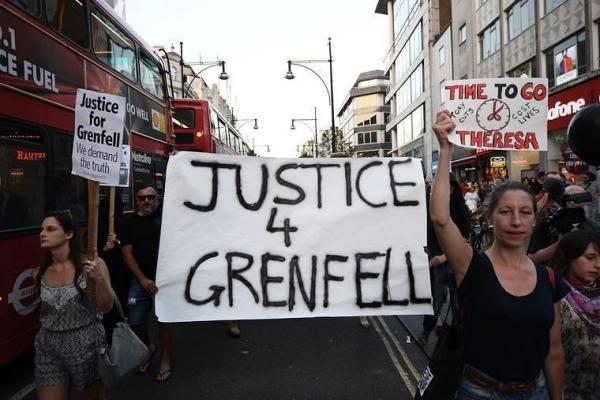 As morally reprehensible as allowing an AussieAmericano media mafia family an even bigger stake in UK news outlets, the government was due to announce (now confirmed) which retired judge will take responsibility for taking year after year after year (and millions of pounds) to come to any kind of conclusion as to what happened, what were the failures and who was responsible for the Grenfell fire and the installation of combustible cladding on tower blocks all around the UK - 127 at the last tested count.

If there were any doubt that the inquiry will drag on after the average Sky News watcher has long forgotten the fire (just as the recent Manchester bombing and Westminster and London Bridge attacks have disappeared from the front pages), we only have to look at the Independent Inquiry into Child Sexual Abuse which is currently on its fourth chair and no further forward; or we can look at Hillsborough - 1989 - 28 years to start prosecutions; or we can look at Home Secretary Amber Rudd's NHS cyber attack claim 'we must learn lessons', knowing full well that no lesson will be learnt because it's too expensive to upgrade the NHS computer system.

When MPs, including Jeremy Corbyn and the Prime Minster visited the Grenfell tower disaster, they promised again 'to learn lessons so this will never happen again'.

Strangely, platitudes that were expressed 8 years ago after the Lakanal Fire where six people perished in similar circumstances to Grenfell. The London Fire Brigade promised to review the instructions telephonists gave to anyone confronted by fire to stay in their flats until rescued - but they gave the same information to Grenfell residents. An All-Party Parliamentary Fire Safety & Rescue Group report after Lakanal said up to 4,000 similar buildings were at risk and that residential tower blocks urgently needed sprinkler systems installed. It has been sat on for four years (Housing Minister four years ago is Gavin Barwell, now Theresa May's Chief of Staff). Now the authorities are tearing down cladding from blocks around the country; there is a call for sprinklers; and at least 80 people lie dead in the morgue or trapped in the crippled wreckage until the end of the year.

Southwark Council was convicted for the Lakanal House fire on February 28 of this year - 2017 (the inquest into the six deaths took until January 2013 to convene). The fire broke out on 3 July 2009. The council received a paltry fine of £270,000 and ordered to pay £300,000 court costs. (The conviction was not for building and refurbishment errors, it was for failing to carry out proper fire inspections and for pre-existing fire safety deficiencies in the block - a complaint levied at Grenfell.)

(Grenfell Tower, on the Lancaster West Estate had been undergoing major refurbishment. The tower block is managed by the Kensington and Chelsea Tenant Management Organisation on behalf of the Council and. It was built in 1974.)

Southwark Council's Building Services Division was responsible for fire safety checks at its flats following the Fire Reform Act 2006, By July 2009 the council had not carried out a single check at any of its residential blocks although it had done so at its facilities managed commercial offices premises.

The judge in the Lakanal prosecution noted that a  'proper inspection would have picked up work from the 1980s that removed vital fire-stopping material between flats and communal corridors'. It was also observed that composite window panels, which had replaced the asbestos originals, burned and spread the fire in less than five minutes, which then caused aluminium windows to expand to allow the fire to enter through gaps and thus directly into individual apartments. (Asbestos had also been removed from voids and around pipes in the block.)

Lakanal should have been a swift and obvious conviction for fire safety failings - and brought justice - but it has taken those 8 long years to get through red tape, legal arguments and the consolidation of 22 charges in to a manageable four.

Theresa May has called for a proper investigation before calling on the retired Sir Martin Moore-Bick, former Queen's Council and Court of Appeal judge. In fairness, he has a reputation for getting things done and will not be afraid to censure his government pay masters - but he will come under scrutiny given the length of time, lack of progress and a failure to recommend prosecutions that public inquires normally suffer from. Sir Martin was a commercial lawyer prior to his 20-year term as a judge. Some may see this as irrelevant to the built environment; others have already said it will hold him in good stead, having dealt with disputes that have compromised the structural integrity of ships.

Hillsborough, Child Abuse, the inquiry' into police corruption, Stephen Lawrence, Leveson, Heysel, and Taylor (Heysel led to fences at football grounds Taylor to all-seaters - nobody who recommended fences will be prosecuted) are just a few enquires that took years to enact, some with accusations of cover-up. (Leveson looked at Murdoch empire's telephone tapping and the alteration of Milly Dowler's last messages. Murdoch may buy the remaining shares in Sky UK today June 29).

It has already been alleged that Moore-Bick's appointment was held-up because fears a controversial ruling he made and its subsequent over-ruling by the Supreme Court might encourage resentment from Grenfell residents. He ruled that it was OK for Westminster City Council to re-home a tenant  in Milton Keynes. Grenfell residents will  be given legal aid to have their experiences and views heard.

One Grenfell resident has already called-in to a radio station to express his concern that Moore-Bick does not have the right experience - and lacks empathy given his Westminster ruling.

Assistant Commissioner for Fire Safety Dan Daly, who said similar things as he stood next to the politicians at Grenfell, said at the conclusion to the Lakanal prosecution: "Bringing this prosecution against Southwark Council has been about ensuring lessons are learned so we can reduce the likelihood of such a devastating fire ever happening again.

"All landlords, including large housing providers, such as councils and housing associations, have a clear responsibility under the law to ensure that their premises meet all fire safety requirements and are effectively maintained to provide protection in the event of a fire and keep their residents safe.

"We want them to take the opportunity provided by this court case to remind themselves of exactly what their fire safety responsibilities are under the law and to ensure that everyone in their premises is safe from the risk of fire."

'Tower blocks or high rise buildings are designed with walls, ceilings and doors that hold back fire and stop it from spreading into other flats or corridors for some time. This means, that if there is a fire in another part of your building, you are usually safer staying in your flat. Also if you leave your flat you could become trapped or injured by smoke or fire.

Get everyone into one room, preferably one with a window that opens and that has a phone in it. Close the door and wait to be rescued. Put bedding or towels along the bottom of the door to seal the gap, to prevent smoke and fumes from getting into the room. Open the window and stay near it for fresh air, and to alert firefighters when they arrive'.

The estimated 80 dead still in the tower are likely to be found in just 20 flats.

The first recommendation made by the Coroner for Lakanl in January 2013  was to  ‘improve the dissemination of fire safety information’ to ensure  residents living in high rise buildings have a ‘clear understanding of what  they should do in case of fire.’

In response the Brigade made a commitment to establish a fire safety forum for high rise residential premises with key private and public sector partners, such as London Councils, London boroughs, housing associations and care providers. 'This will enable us to build on the work it has already done to clarify and reinforce fire safety messages for people living in high rise residential buildings'.

Picture: Will we justice for Grenfell or for Hillsborough for that matter?

Ofcom has today submitted a public interest report to the Government on the proposed acquisition of Sky by Murdoch owned 21st Century Fox. A decision is expected on June 29 - to allow or refer to the merger and monopolies authorities.

Specifically, Ofcom was asked to consider whether there would be sufficient plurality of persons with control of the media enterprises; and whether the parties would have genuine commitment to the attainment in relation to broadcasting of standards objectives.

The Facilities Event And Sister Exhibitions At Birmingham NEC

The Facilities Event and sister exhibitions at Birmingham NEC saw good steady footfall with a mix of subject matter in seminar sessions while exhibitors worked well....