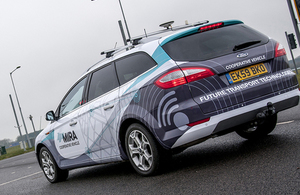 Driverless cars could significantly reduce delays according to a new study by the Department for Transport.

The project used computer software to create virtual models of different parts of the UK road network including urban roads and a 20km motorway section.

Delays and traffic flow were all shown to improve as the proportion of automated vehicles increased above specific levels.

This study is an important first step towards understanding the full range of complex effects of these technologies. It paves the way for further trials and research to help ensure the transition to driverless or automated vehicles is safe and beneficial for all.

Transport Minister Johns Hayes said: “This exciting and extensive study shows that driverless cars could vastly improve the flow of traffic in our towns and cities, offering huge benefits to motorists including reduced delays and more reliable journey times.

“Driverless cars are just one example of cutting edge technology which could transform the way in which we travel in the future, particularly in providing new opportunities for those with reduced mobility. This study reinforces our belief that these technologies offer major benefits and this government will support their research.

“The study examined different scenarios including the level of automation, the proportion of vehicles equipped with the technology and different automated driving styles.”

The main findings of the report included that:

As well as this study, the Department for Transport along with the Centre for Connected Autonomous Vehicles is publishing a response to a consultation on insurance for driverless cars.

The response details proposals to extend compulsory motor insurance to include the use of automated vehicles. The response aims to establish a model where an insurer would cover both the driver’s use of the vehicle and the driverless vehicle technology itself. These proposals are intended to be taken through the Modern Transport Bill.

Commenting on the Government’s response to the consultation on automated vehicles, Ben Howarth, the ABI’s senior policy adviser on motor and liability, said: “It’s good to see the Government adopting the insurance industry’s proposals to keep motor insurance as straightforward as possible for customers in a world of increasingly automated vehicles. We look forward to seeing further details in the Modern Transport Bill. In the meantime we will be continuing our productive relationship with the Government’s Centre for Connected and Autonomous Vehicles, helping officials work through the various challenges created by this evolving technology. Automated vehicles have the potential to revolutionise our transport systems and dramatically improve road safety, but it’s right the insurance system is developed in parallel to give motorists confidence in using them.”