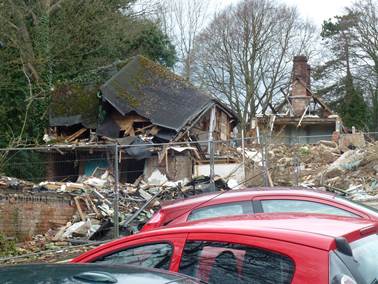 A Hertfordshire based contractor has been found guilty for a series of safety failings across two separate sites.

HSE had received a complaint in March 2014 from a member of the public living close to the former Chesham Community Hospital site in Buckinghamshire, concerning activities taking place on the premises.

When HSE inspectors arrived they found a ‘catalogue of failings’ including the presence of asbestos containing materials among building debris, demolition arrangements not recorded in writing and witness accounts of dangerous practices including unsafe work at height and use of construction machinery, poor site security and a lack of welfare facilities. It was HSE’s opinion there was also a serious risk of injury from collapse of partially demolished buildings.

Enforcement action was taken immediately by way of Prohibition and Improvement Notices being served on both the contractor and client to ensure continuing risks were controlled. The client, Chesham Care Ltd, was prosecuted for failings under the Construction (Design & Management) Regulations 2007 (CDM) and fined a total amount of £30,000 in October 2015. Milton Keynes Magistrates’ Court heard attempts were made by HSE to contact the contractor without success. However, in June 2015 a HSE inspector was alerted to unsafe working practices at a site in Stevenage, Hertfordshire.

Upon attending, the HSE inspector found the same contractor in control of workers unsafely dismantling parts of the building to recover recyclables, such as metal. No risk assessment had been done regarding respiratory exposure to asbestos containing materials. The client told HSE the contractor was working without their knowledge on the site and had alerted the police. As well as immediate enforcement action being taken on site to control risks, a private investigator was subsequently used to track down the contractor who had failed to respond to HSE.

After a trial Scot Ian Richardson was found guilty of two breaches of the CDM Regulations 2007, one breach of The Control of Asbestos Regulations 2012 and one breach of The Health and Safety at Work Act etc,1974 and was sentenced to four months suspended custodial sentence and 200 hours community service order. He was also ordered to pay costs of £1,200.

“Sole traders who control workers to demolish and dismantle structures must understand their legal obligations,” stated Rauf Ahmed, Inspector, HSE. “This is a high risk industry in which poor planning has no place. Family members expect their loved ones to come home in one piece and clients have a key role in safely directing construction projects. Effective arrangements at the start can have an amplified positive impact down the various stages to completion, including making informed and competent appointments.”