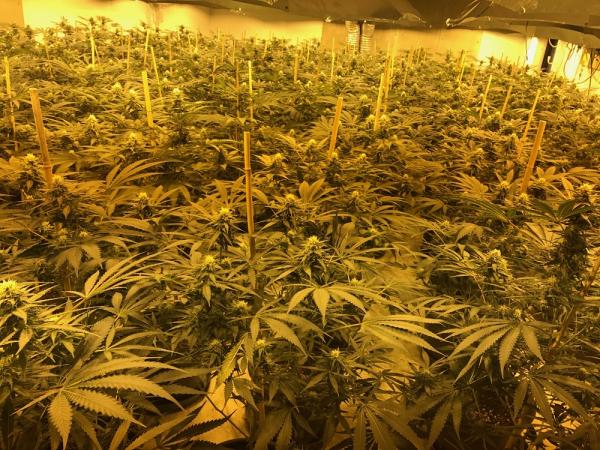 Police 'raided' the most unusual vacant property in the week ending Feb 24 (Feb 22) that had been occupied by cannabis growers.

A nuclear bunker had become home to the county’s biggest cannabis factory. Unfortunately the phrase raid does not entirely fit as the growers were tucked away behind the bunker's solid concrete doors - forcing police from the Dedicated Crime Team to wait outside until three people emerged from their hard night of nefarious activity. It was a cold midnight before the officers were able to jump out and cry 'you're nicked' at RGHQ Chilmark – an underground nuclear bunker constructed in the 80s to house and protect government officials and local dignitaries in the event of a nuclear attack.

Although the site is no longer owned by the Ministry of Defence, the bunker is still intact and the nuclear blast doors are still in place.

The police used the keys the first three arrested had with them to open the doors and subsequently arrest another three 'gardeners'.

The three men found inside the bunker are aged 15, 19, and 37, all of no fixed abode. The three men detained outside of the bunker, aged 27, 30 and 45, are all from Somerset and were arrested on suspicion of cannabis production and human trafficking offences.

Detective Inspector Paul Franklin, of the Dedicated Crime Team, said: “There are approximately 20 rooms in the building, split over two floors, each 200ft long and 70ft wide. Almost every single room had been converted for the wholesale production of cannabis plants and there was a large amount of evidence of previous crops. This was an enormous set up.

Picture: Up in smoke - just some of the cannabis found in a nuclear bunker

The use of x-ray scanners to deal with the large scale 'import' of drugs into prisons is being seriously considered by the Justice Secretary Chris...

Surge in Drug Driving in the UK Goes Unnoticed

According to the latest research, there has been a 75% increase in driving under the influence of drugs in just two years. Latest drug-driving stats show a rise of...