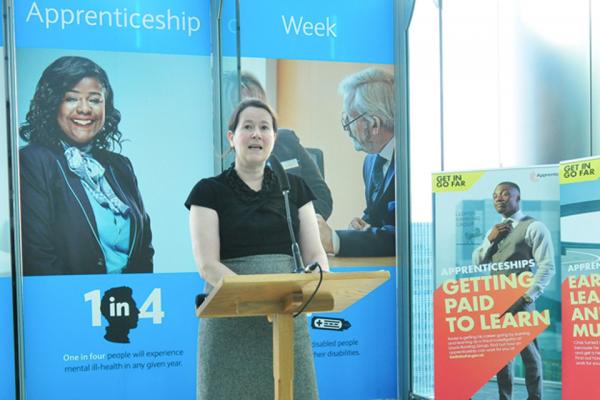 March 6-10 was the tenth annual National Apprenticeship Week. The week aims to highlight the success of apprenticeships over the last decade and look to the positive impact on individuals, businesses and the economy, with the theme 'ladder of opportunity'.

A launch event held at Barclays Bank on Canary Wharf officially kick-started the week, with Secretary of State for Education Justine Greening addressing an audience of 100 employers and apprentices.

Greening highlighted not only the lifetime benefits associated with gaining an apprenticeship but also how apprenticeships are a gold-standard route into a great career.

The Minister was followed by accounts from former apprentice Lucy Wilkins at Somerset County Council and Get In Go Far campaign star Chris Achiampong from IBM. They were joined by two Barclays apprentices – Jonathan Allen and Natalie Ojevah.

“I have no doubt that this, our 10th National Apprenticeship Week, will be our biggest and best yet.

"Apprentices are on the path to a great career with an apprenticeship; and for employers, apprenticeships bring opportunity: to attract new talent, to offer progression for current staff, and to develop a motivated and highly qualified workforce. With apprenticeships available in 1500 job roles and covering more than 170 industries – there has never been a better time to get involved in apprenticeships."

A huge range of organisations, including employers, apprentices, training organisations, colleges and schools are supporting the week by hosting events and activities. Full details of the events happening across England can be viewed when you Click Here

ThisWeekinFM will bring you more articles as NAW 2017 runs from 6 to 10 March.

Ofsted is due to publish a report on Wednesday (October 21) about apprenticeships in the UK and has found some aspects wanting in terms of quality. The head of Ofsted,...

The Department for Business, Innovation & Skills has stated that the term ‘apprenticeship’ will be protected in law. With over 2.2 million...