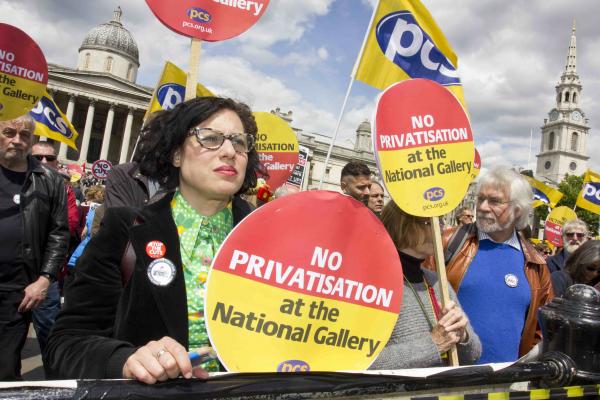 The long running industrial dispute between the National Gallery management and the PCS union has erupted into an ‘indefinite’ strike with both sides at daggers drawn.

The decision by the Public and Commercial Services Union (PCS) to call out its members for what it terms ‘indefinite strike action’ follows the unilateral decision by the National Gallery management to award a contract to Securitas as its partner to manage some visitor-facing and security staff services.

A bitter difference of opinion over the contracting out of services had seen 57 days lost prior to this current situation. In a statement by the management, it stated that in the year of dispute it had acted in the best interests of the National Gallery: ‘The PCS opposes the introduction of new working practices for some visitor facing and security staff which would enable us to operate more flexibly and deliver an enhanced service to our six million annual visitors. The National Gallery is a public asset and has a duty to ensure the collection and the Gallery itself is accessible as much as possible, to as many people as possible.’

For its part, PCS has argued against the awarding of a five-year contract to Securitas, worth an estimated £40 million and that would see approximately 300 of the gallery assistants have their employment transferred to the contractor.

“The mood on the picket line today [11 August] was upbeat and members are feeling positive,” said Paul Bemrose, Industrial Officer PCS. “There was a picket line of about 30 members and we have heard that more rooms inside the Gallery have been closed than on previous strike days.”

The strike action has received support from the current Labour Party contender, Jeremy Corbyn who issued a statement. ‘National Gallery workers have been forced to take this action because of the intransigence of management. These low-paid workers are proud public servants and don’t want their jobs sold off.’

As part of its dispute, PCS is fighting for the reinstatement of the Lead Rep, Candy Unwin who was suspended on the eve of the strike and then sacked by the management.

The management state that there were guarantees that no members of staff would be made redundant in this process and all affected staff would continue to be paid the London Living Wage which had been introduced last month. All those staff affected would have the option to move to Securitas with the same terms and conditions.

It also pointed out that Securitas already had contracts in security and visitor engagement roles within the arts and culture sector both within the UK and abroad, including with the Royal Armouries (Leeds), National Gallery of Denmark, National Gallery – Prague and the Alhambra Museum – Granada.

Picture: The long-running dispute between the National Gallery Management and PCS union has boiled over, leading to indefinite strike action. (Image courtesy of PCS/Jacky Chapman.)