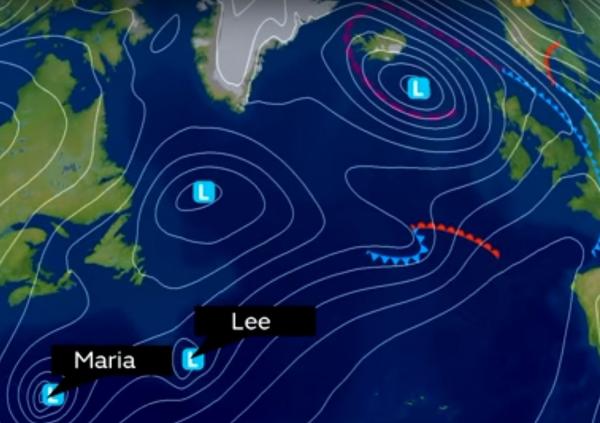 After a week of typically autumnal weather – with foggy nights, pleasant sunshine and periods of wind and rain – a more unsettled spell of weather looks likely for this weekend and the start of next week, according to the Meteorological Office.

Don't forget to see our regular weather report by De-Ice's Vicky Lopez in our Spotlight section.

Meteorologists have been monitoring the progression of tropical systems Lee and Maria in the Atlantic and any likely impact they may have on UK weather. By the weekend, these systems will have drifted away from the tropics. As they lose connection with warmer tropical waters they will lose this source of energy and weaken rapidly as a result. The waters in our latitudes of the North Atlantic are far too cool to sustain an actual hurricane.

Steve Ramsdale, Chief Operational Meteorologist at the Met Office explains: “The remnants of tropical systems are likely to have an impact on our weather towards the end of the weekend and into the beginning of next week. However, it is important to say that any weather impacts will be very different from those experienced in the Caribbean.”

Although both systems will be much weaker by the time they enter the UK’s latitudes, their remnants will still contain air of tropical origin which can exert an influence on the weather in the north-east Atlantic, including across the UK.

Ramsdale added: “The track of these systems and how they may interact with another area of low pressure in the Atlantic is uncertain – there may end up being one large area of low pressure or several separate systems. However, many places will see a period of wet and windy weather later this weekend and into next week. It looks likely that western parts of the UK will see the heaviest rainfall and a yellow."

"A National Severe Weather Warning has been issued for rainfall for Sunday and Monday. But, as ever, the best advice is to keep up to date with the latest forecast and warnings,” Ramsdale concluded.

"The good news is that once these systems clear away eastwards, the weather is likely to settle down across the UK as high pressure builds. Bizarrely, there is more confidence in the forecast for the end of next week than for this weekend, which demonstrates the power tropical systems have to influence our weather."

Picture: Maria and Lee are on the way

Below: Will Hurricaine Maria affect the UK?

Downpours Bring The Roof Down

June 24 saw the Met Office warn of heavy storms - and almost as the alerts went out, Stirling University and the local Tesco felt the full force of nature. The...