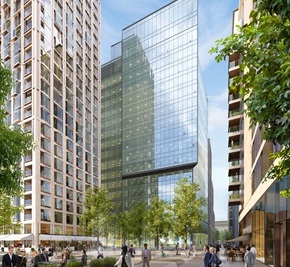 A billion pound Southbank Place scheme has been announced this week that is being touted as becoming London’s ‘cultural epicentre’.

Buyers are being given the opportunity to register their interest in a new residential development coming to London’s South Bank which launches in September.

The project is the result of a joint venture between Canary Wharf Group and Qatari Diar. Southbank Place will be a mixed-use scheme development that will frame the existing Shell Tower to form a world-class destination with new public spaces, state of the art onsite amenities and what should be some of the most spectacular views of central London that the city has to offer. Residents and people working there will be able to enjoy vantage points over the Houses of Parliament, Westminster, the City and beyond.

Progress is underway on 868 homes that are being built on the 5.25-acre Shell Centre site, set in the heart of London’s cultural quarter. This new residential development will also house 98 affordable homes (266,066sqft), including 52 extra care homes for elderly and disabled people on site, plus an additional 70 affordable homes off site on Lollard Street. Southbank Place will also include 48,000sqft of shops, restaurants and cafés, plus 530,000sqft of office space.

Some of the world’s leading architects, including Kohn Pederson Fox, Squire & Partners, Patel Taylor, Stanton Williams, GRID and Townshend Landscape. The interiors are being designed by industry expert Goddard Littlefair and Johnson Naylor.

“The design and quality of the buildings and open spaces will not only add to the existing social environment but will give back to the South Bank community through the creation of affordable homes and generation of local employment and economic development facilitated by SLPN,” explained Sir George Iacobescu, Chairman and CEO, Canary Wharf Group. “This initiative which was set up several years in advance of the start of work by Canary Wharf Group, has already placed £4.5 million of contracts with local SMEs.”

Picture: Announced this week by Canary Wharf Group and Quatari Diar, Southbank Place will be a mixed-use scheme development that will frame the existing Shell Tower with new public spaces, onsite amenities and desirable and affordable homes