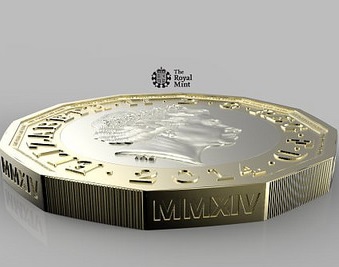 Tuesday March 28 saw the introduction of the new One Pound Coin which the Treasury is hailing as a groundbreaking security initiative whilst those in charge of everything from vending machines to supermarket trolleys are finding it an inconvenience.

The Government has spent three months on a campaign to raise awareness that a twelve sided £1 was on its way - and that the old round Pound will no longer be legal tender come October 15. It has been ineffective to say the least.

However, most businesses have been aware for considerably longer and will have changed their vending machine mechanisms to accept both the new and the old coins.

Most supermarket trolleys will take both old and new and tokens with only Tesco having to adjust trolleys at its 300 largest stores.

Meanwhile, clubs and pubs and other smaller outlets have been slow to respond.

The new twelve side Quid is claimed to be the most secure coin in the world. It boasts several new security features, including a hologram, to prevent counterfeits.

Chief Secretary to the Treasury David Gauke said: "March 28 should be an important date in everybody’s calendar this year - as we will have a new Quid on the block. This is a historic moment as it’s the first time we’ve introduced a new £1 coin since 1983 and this one will be harder to counterfeit than ever before.

Helen Dickinson OBE, CEO of the British Retail Consortium, said: "Through the British Retail Consortium, most major UK retailers have been engaged in discussions and planning with the Royal Mint and Her Majesty’s Treasury since the March 2014 announcement that a new pound coin would be introduced in 2017. Our aim is to ensure that the implementation of the new coin runs as smoothly as possible for our customers and staff. Our combined input into the project means we’re confident the new coin will address the issue of counterfeit coins for businesses and the general public alike.

"While there will be a natural transition period where some vending systems may only be able to accept the existing pound coin, our industry is committed to ensuring we’re fully prepared."

The Royal Mint has produced over 2.2 billion round pound coins since 1983 – that’s the same weight as nearly 6,000 elephants.

25 different designs have appeared on the current pound coin from dragons to trees.

The Royal Mint will make over 1.5 billion of the new £1 coins.

If you put these coins side by side, there would be enough to go from the UK to New Zealand and back.

The new £1 coin is based on the design of the old twelve sided three penny bit, a popular British coin which went out of circulation in 1971.

It is being made at the Royal Mint in Llantrisant, Wales, at a rate of up to 2,000 each minute.

This equates to more than 30 coins every single second and nearly 3 million new £1 coins per day.

Some of the round £1 coins returned by the public will be melted down and reused to make the new £1 coin.

The oldest British coins in the Royal Mint’s collection dates back over 2,000 years.

Some coins produced by the Royal Mint are tested every year to ensure they meet the correct specifications at the ‘Trial of the Pyx’, a judicial ceremony which dates back to the twelfth century.

The Chancellor is the UK’s official Master of the Mint – a title previously held by Isaac Newton.

Picture: The new twelve sided One Pound Coin which is worth about the same as its predecessor, the three penny bit

Is There a Market for Flat-packed Food?

Metis has been asked to conduct an intensive, worldwide marketing campaign to find partners to commercialise the Hopper Pot, a compressible pot designed for...

Nestling in for a Golden Cuppa

The Nescafé Gold Blend Barista-style machines are claimed to provide operators with the ‘perfect opportunity’ to offer consumers the authentic quality...