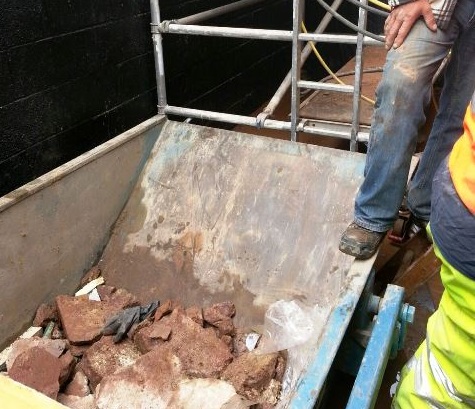 Cardiff based construction company, Jehu Project Services Ltd, sentenced on August 16 after a worker was seriously injured falling down a lift pit.

The incident happened on 8 July 2015 at a construction site in Pontcanna, Cardiff. Stephen Harrison, a specialist drilling contractor, was employed by Jehu to help refurbish a 73-bed care home when he fell into the basement of a lift pit that was under construction.

Mr Harrison stepped onto the ground floor having been working off a tower scaffold but stood on a loose concrete block causing him to fall backwards, head-first, into a skip full of rubble on the floor below.

A specialist Fire and Rescue team were nearby and after stabilising Mr Harrison, attached him to the hook of a tower crane and winched him out of the pit, over the site and into the carpark of a housing estate nearby where an ambulance was waiting.

Mr Harrison suffered shattered vertebrae, five broken ribs, a punctured lung and spent 18 days in hospital. He is still recovering and although not paralysed, his injuries were life-changing and he will not return to work.

The HSE investigated the incident and found that Jehu had been using a system of lightweight barriers around the edges of the drop, along with bean bags at the bottom of the hole but these were incompatible with all of the work that needed to be done by the different contractors and had been removed. Following the incident, all of the danger areas were fenced with scaffolding.

Newport Crown Court heard that there were numerous management failings associated with this project, which included a lack of effective site management and supervision, a construction plan that did not properly consider obvious working at height risks and a lack of an effective Temporary Works Management System.

HSE Inspector Liam Osborne, who brought the case, said: “Jehu had been given many warnings in the past by the HSE about the lack of effective planning, managing and monitoring on their construction sites, as well as warnings about unsafe working at height. The court heard some really positive steps the company are now taking to put these matters right, including making substantial management changes.

“It is crucial that construction firms properly think through the risks involved before starting work, they then need to ensure there is a workable plan to iron-out or manage the resultant dangers.

“There is a clear hierarchy for managing work at height risks, site managers need to prevent it if possible and then provide suitable fixed barriers. Lower-order measures, such as soft-landing systems or the use of harnesses should only be selected as a last resort and if it is safe and appropriate to do so.”

Picture: The skip full of rubble that Stephen Harrison fell in to