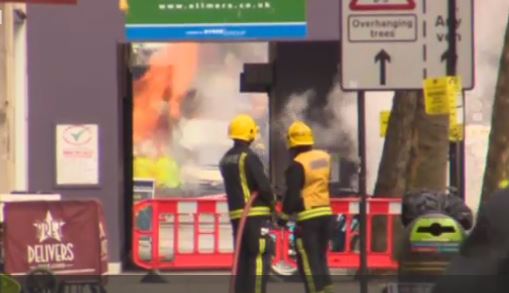 The fire that started on April Fools Day (Wednesday 1 April) in a tunnel on Kingsway, Holborn in London burned until Good Friday - with a mass evacuation of commercial and retail premises in the vicinity. Many tenants are still not able to return to their buildings. We report how local occupiers coped.

The blaze, which was reported widely in the papers and on TV, was started by a still unknown electrical fault that occurred in The Kingsway Tunnel which runs below The Stand Underpass which runs from Waterloo Bridge under The Aldwych and up into Kingsway, Holburn. (The area sits between the City of London and the West End - expensive real estate. To the East of the Aldwych is Fleet Street. To the West is The Strand which leads down to Trafalgar Square. Directly behind The Kingsway to the West is Covent Garden.) There are effectively two tunnels - one that until relevantly recently carried motor vehicles (The Strand Underpass) and another (The Kingsway Tunnel) that once  provided a trolley bus terminus. It is believed that the fire started in the later which is deeper and has been closed for many years. It is currently used as storage by Camden Council.

The electrical fault manifested itself in some buildings in the area as lights flickered and lifts began to take a dislike to the electrical disruption. The fault eventually deteriorated and caused an explosion that was able to take out and eight inch gas main - which subsequently burned for two days. It is claimed that initially the fire brigade was unable to locate not only the source of the fire but were also unable to isolate the main. The Brigade were forced to allow the fire to continue to burn - they could not allow gas to seep away underground where it might have caused explosion elsewhere; and they were reluctant to force foam into the tunnel for fear of causing structural defects that could destabilise the tunnel and nearby buildings. Water, in vast quantities, was used to keep stop the fire spreading.

The fire was eventually contained within the tunnel and nobody was hurt. However, power and data has not been restored to a number of properties closest to the tunnel. And structural surveys will still need to be carried out.

London Fire Brigade estimate that about 5,000 people were evacuated and 100 businesses affected. ThisWeekinFM's sources have said that is a gross under-estimate especially as Easter holiday tourists who were affected by the fumes have not been included in evacuation figures. UK Power Networks put the number affected by the power cuts at 3,000.

Roads were closed right through Bank Holiday Monday - some have suffered heat damage and will need repair. Most tenants were able to return to their buildings on Tuesday - but some will not come back for weeks.

Matt Rudling of UK Power Networks said that the company was able to put emergency generators in place by Thursday while engineers attempted to re-route power via unaffected cables. National Grid engineers were due at the scene on Tuesday. City of London Telecom which provides data to a large number of firms has not yet re-established connections.

According to the BBC, on Wednesday a number of West End theatres were forced to cancel performances on Wednesday evening including Beautiful - The Carole King Musical, Charlie And The Chocolate Factory, Disney's The Lion King, Gypsy, Mamma Mia! The Play That Goes Wrong and The Woman In Black. Thursday's matinee performances at the Novello and Aldwych theatres were also cancelled.

And yet the show goes on

Neil Winter is a building manager for Capita which acts as managing agent for 77 Kingsway. he told ThisWeekinFM: " We weren't affected as badly as some of the buildings further down the road but we all had to evacuate on April 1 in the afternoon. The smoke affected people on the street and at first it was thought to be a pavement fire (London experiences regular electrical fires just below street level) but it transpired it was the tunnel that runs along Kingsway so the smoke permeated the basements setting alarms off.

"Power went off - the tunnel carries power distribution cables to shops and the buildings along Kingsway. 77 is between Holborn and the tunnel - right  on the section that had all the power issues. Buildings north of us didn't lose power at all.

"I got the call that there was a problem (the fire showed in the afternoon) but by the time I got there, everyone had gone. We have an evacuation procedure which meant the building had been swept to make sure nobody was left inside but the fire brigade made everyone leave the area which was not in our plan. 300 people left our building.

"The electrical phases eventually went to our lifts - they didn't fail in one go. We were fortunate no one was in one as that would have meant the brigade having to a winch it down. In other buildings we manage, we have 'critical to life generators' but not at 77.

"We got the 'all clear' on Tuesday from the police and UK Power Networks. Staff and tenants were sent  an email via a predetermined system to let them know it was OK to return. At least one of our tenants has not returned because they still have no data or internet - they're on City of London Telecom which is still down. Near the centre of the fire they won't be back for weeks.

"I constantly communicated with our tenants - but I have learned that you should only give out confirmed positive information. If you say 'possibly' it will only raise another question you can't answer and it's frustrating when you have to go back with updates that contradict what you have communicated before. There's a fine line between communication and causing confusion."

Ben Edwards works for Sodexo which has premises on Kingsway. He writes:

On Wednesday 1 April, an electric fire broke out underground at Kingsway near Holborn, which resulted in local businesses being evacuated so that emergency services could cut off the power supply and tackle the fire.

Sodexo’s UK and Ireland headquarters are based in Southampton Row, just a couple of minutes from Kingsway, and was one of the local businesses affected in the incident.

At about 5pm, Sodexo’s facilities team was advised by the emergency services that it needed to evacuate all employees from the building. The team walked the two floors that Sodexo occupies at One Southampton Row advising employees of the situation and ensuring the building was empty.

Throughout the evening, the Sodexo facilities team liaised with the building landlord and emergency services to ensure it was aware of the situation and the potential business impact. The team worked in close collaboration with Sodexo’s business continuity committee, the corporate communications team and the IT team based in Manchester to ensure all stakeholders were prepared to invoke its business continuity plan.

Had the emergency services needed to cut the power supply in the Sodexo offices, the IT team were ready to perform a controlled close down of the servers onsite; employees would have been advised to work from home where possible; and Sodexo’s offices in Stevenage would have provided a base for up to 30 employees if they needed an office environment in which to operate.

While Sodexo was preparing to invoke its business continuity plan, news came through from the emergency services that Southampton Row would remain outside of the cordoned area and businesses could therefore operate as usual. The news was communicated by email to all office-based staff, allaying any concerns and confirming that it would be business as usual on the Thursday.

Phil Hooper, Sodexo’s head of corporate affairs and chair of the business continuity committee said: “The incident was a good test of our business continuity management. While we didn’t have to invoke our recovery plan, the right people were talking to each other to ensure we were on top of the situation.”

Picture: The fire started on Wednesday April 1 and burned until Good Friday.