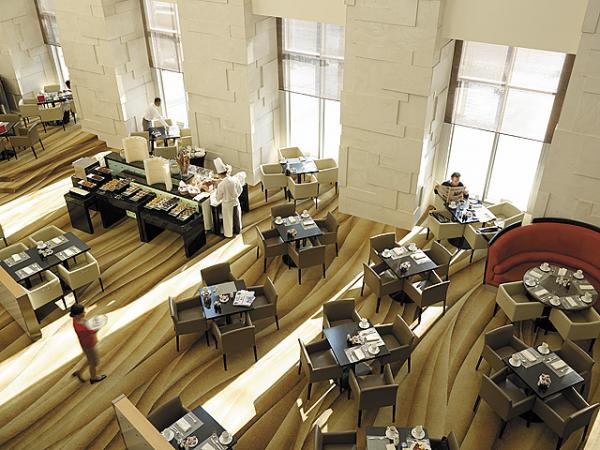 The London Shangri-La Hotel will open for business on May 6. It will be quite stunning – in keeping with Shangri La Group hotels around the world…it is the only one in the UK but boasts the most impressive of locations The 72-storey Shard – Europe’s tallest building.

Not all of the 202 bedrooms will be available but it is expected that the conference and meeting facilities will be available along with a stunning restaurant (main pictured is a restaurant from Abu Dhabi) and of course the swimming pool on the 52nd floor. The hotel is located at floor 34 up to 52. (Rooms range from £450 a night for basic to well over £3,000 – butler extra.)

"Our continued expansion in Europe reflects the growth opportunities for the brand and portfolio," said Shangri-La President and Chief Executive Officer Greg Dogan.  "The Shard is a landmark synonymous with London and we hope to encourage visitors to our hotel and the surrounding area."

Every detail of the hotel environment has been taken into consideration – from the extensive collection of original artworks on display to the spectacular grand staircase sweeping across double length floor to ceiling windows, linking levels 34 and 35 within the hotel's sky lobby.

Guests will be escorted in a high-speed elevator from the hotel's dedicated entrance on St. Thomas Street to the sky lobby on level 35.  Subtle Asian touches in the lobby and lobby lounge will reflect Shangri-La's heritage, while modern and classic art with pieces from a mix of acclaimed Asian and British artists are showcased throughout public areas.

The hotel's 202 guestrooms and suites will open from levels 36 to 50 and are amongst the largest in London.  Because of The Shard's spiral shape, each of the spacious guestrooms and suites, which range from 30 to 188 square metres, is individual in layout and design. All feature floor to ceiling windows and unrivalled views across the city, marble-clad bathrooms with heated floors, separate bathtubs, Acqua di Parma amenities and mirrors with integrated television screens. Over a third of these bathrooms have city views.

Deluxe, Premier and Grand Premier rooms and suites offer northerly views towards the City and London's most famous landmarks. Superior guestrooms and suites feature far-reaching vistas over the vibrant areas of the south and towards the historic counties of Kent, Surrey and Sussex.

Some of the most stunning views are from the hotel's three signature suites that will be unveiled in September. All signature suites overlook St. Paul's Cathedral, Tower Bridge and down river towards the O2 Arena.  The jewel in the crown is the Shangri-La Suite, situated on level 39, providing 180-degree views of London.  From the Palace of Westminster and Big Ben to the Tower of London, the view encompasses the River Thames with the Canary Wharf, Tate Modern, Shakespeare's Globe Theatre and Maritime Greenwich dotted along the meandering waterway.

The hotel will feature three wining and dining venues.  G?NG, London's highest bar on level 52, takes its name from 'dougong' – an ancient Chinese structural element of interlocking wooden brackets that will be a component of the bar's interior. T?NG, derived from the Chinese word for a living room, is the signature restaurant and lounge on level 35 and LÁNG – the Chinese word for 'pathway' – is an artisan deli on the ground floor.  Level 52 will also be home to a 24-hour gym and London's highest infinity pool and along with G?NG, level 52 will duly open from 1 July.

Three river-facing event spaces on level 34 offer stunning views and state-of-the-art conferencing technology along with catering services.  The largest of the venues, Ren, accommodates up to 140 guests; the other two, Yi and Li, can hold up to 10 and 35 guests, respectively.  The grand staircase connecting levels 34 and 35, with its vista of St. Paul's Cathedral and beyond, will be a picture-perfect location for wedding photography.

"We are thrilled to be opening our doors in May after a number of years of planning and preparation," said Darren Gearing, executive vice president and hotel general manager of Shangri-La Hotel, At The Shard, London. "The hotel's inspiring views will connect emotionally with guests, while our service hallmarks will position the hotel at the forefront of the world's finest hotels."

The hotel will be open for advance rooms, events, restaurant and lounge bookings from 17 March.

Hong Kong-based Shangri-La Hotels and Resorts currently owns and/or manages more than 80 hotels under the Shangri-La brand with a room inventory of over 34,000. The group has a substantial development pipeline with upcoming projects in mainland China, India, Mongolia, Myanmar, Philippines, Qatar, Sri Lanka and the United Kingdom.

In January a massive fire razed to the ground a 1,300-year-old Tibetan village that some said was home to the Shangri-La from James Hilton's The Lost Horizon

As the hotel sector thrives amid the UK staycation boom, a report has revealed opportunities for hotel design to include further wellbeing and comfort measures to...

The decision by Sapphire Systems to move to London’s Shard means the 72-floor building will be almost full. The Shard now has 26 companies across 14 business...