No Trouble at Mill 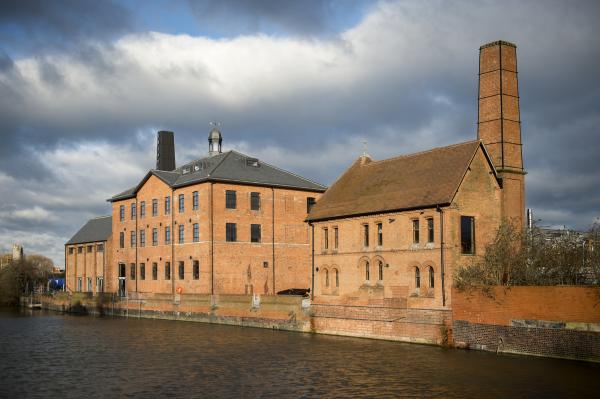 Friars Mill, on the banks of the River Soar, has been ‘transformed’ from a derelict site of empty factory buildings into a collection of modern workspaces for growing businesses.

The £7.1 million, ERDF-backed redevelopment project has helped preserve Leicester’s oldest surviving factory building which was nearly lost to fire on 2012.

While Friars Mill itself offers 15 workspaces over its 25,000sqft, demand for business accommodation on site is such that work to build two new office units was underway as final touches were being made to the restoration of the historic mill complex.

“Friars Mill is a wonderful collection of buildings and I am very proud that we were able to bring them back into meaningful and fitting use,” declared Sir Peter Soulsby, City Mayor. “The project has helped preserve a fascinating chapter in the city’s industrial heritage by creating really attractive, modern workspaces where businesses can grow and build a prosperous future. It will be a beacon of the wider regeneration of the Waterside area and shows what is possible.”

Almost half of the available units were reserved before the development had even opened its doors. “We’re very excited to be managing Friars Mill,” said Scott Knowles, CEO, East Midlands Chamber. “It is a very prestigious site in a wonderful location and combines elements of the city’s industrial heritage with cutting edge, modern design to create a place to do business.”

A plan for the multi-million pound transformation of around 60 hectares of land around the city’s river has already been set out.

Over the next 10 years, the city council will work with developers to redevelop Waterside into what it believes will be a thriving place to live, visit and do business in and reconnect Leicester to its waterfront with the goal of making it one of the biggest regeneration opportunities in the East Midlands.

An architectural competition to find a new use for a ‘quirky’ little two-acre island in the middle of Waterside received over 80 entries, including ideas from as far afield as Japan, Spain, Hong Kong, Italy and America.

The city is being promoted for its geographical and workforce advantages for prospective employers and investment. It is situated in the centre of the UK, an hour from London by train with an international rail connection at St Pancras, offering a 1 million plus workforce and good transport network into the city centre.

Picture: Friars Mill in Leicester is part of an ambitious regeneration plan being pursued by the city council

I-Construct, in association with the Building Research Establishment (BRE), is launching a free scheme to help 20 small and medium-sized businesses bring their new...

How has Diwali Been Celebrated During the Pandemic?

On the final day of Diwali celebrations, how has the festival of lights been celebrated in 2020? Diwali 2020 is from November 12 to 16, with Amavasya (new moon day)...

A gas network construction project fundamental to a £1bn regeneration scheme in Liverpool has been completed three months ahead of schedule, despite the coronavirus...