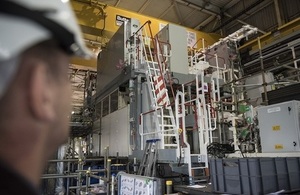 Every facility needs a bit of a spruce-up once in a whaile but would you fancy the job of cleaning Sellafield? A 350 tonne machine has just been installed to tackle one of the world’s most challenging nuclear missions.

The £100 million Silo Emptying Plant will scoop radioactive waste out of the Magnox Swarf Storage Silo.

The 1960s storage facility has been described as one of the most hazardous buildings in western Europe and contains 10,000 cubic metres of intermediate level waste from the earliest days of the UK’s civil nuclear industry.

John Clarke, outgoing NDA Chief Executive, said: "This is an enormous step forward for the Sellafield decommissioning programme. It is the culmination of 20 years of work to get to the position where we’ve got the first machine in place that will retrieve waste from these silos."

The machines will sit on rails on top of the silo’s 22 vertical waste compartments. Each compartment is big enough to accommodate six double-decker buses stacked three high.

Once operational, the emptying machines will be manoeuvred into place over the top of each compartment to scoop out their contents. The material will then be packed into nuclear skips and sent to modern waste stores at Sellafield, pending final disposal in the UK’s Geological Disposal Facility.

The machines will be ready to start retrieving waste in 2018, taking an estimated 20-25 years to complete the task.

Chris Halliwell, head of the Magnox Swarf Storage Silo, said: "This is probably the most complicated and advanced machine ever built at Sellafield. It has about 13,500 different working parts and its design and concept was first drawn up more than 20 years ago."

The emptying machines were built by engineering firm NES Ansaldo at its Wolverhampton factory, before being dismantled and sent to Sellafield in 23 separate modules.

These modules were lifted one by one into the silo building and then re-assembled in situ.

According to the Nuclear Decommissioning Authority a year ago, the controversial nuclear power plant in Cumbria, North West England, was supposed to be cleaned up for...

The plans for a nuclear power plant in Cumbria which is underpins UK energy policy (and others under construction around the world) have fallen in to disarray as news...

The Cleaning & Hygiene Suppliers Association has continued its member audits throughout the pandemic and has reported a 93 per cent compliance rate across all...

How has the Cleaning Sector Coped with Coronavirus?

The cleaning and hygiene industry has been assessing the huge impact of Coronavirus and the lockdown on different sectors, businesses, and operatives. A British...