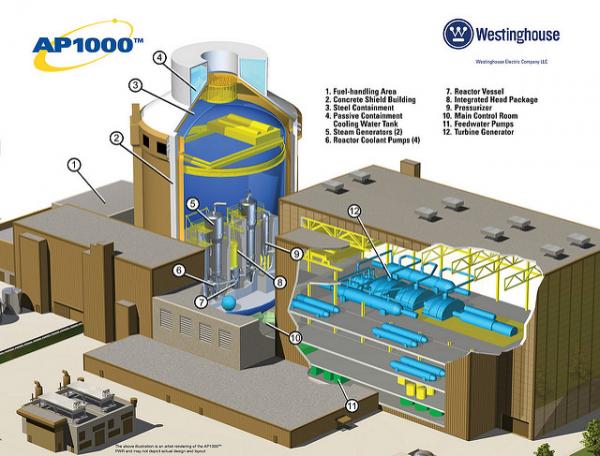 The plans for a nuclear power plant in Cumbria which is underpins UK energy policy (and others under construction around the world) have fallen in to disarray as news that Toshiba's nuclear company has taken Chapter 11 bankruptcy protection.

Westinghouse Electric (a US based Toshiba subsidiary) is the company due to supply three of its relatively newly designed AP1000 reactors as part of a consortium (NuGen) bid to build what would be Europe's biggest nuclear installation. The Office for Nuclear Regulation approved their design only yesterday (March 30). The regulators required 51 General Design Assessment Issues to be resolved before confirming the suitability of the AP1000. All of the issues have been addressed to the regulators’ satisfaction.

Engie (or what was EDF) is also part of the NuGen consortium who are in turn in league with Chinese Government investors. Westinghouse would not be able to honour its commitments to the consortium whilst still in Chapter 11. Toshiba on the other hand will not take on the financial commitments and indeed, is looking to sell its 60 per cent shareholding in NuGen.

Westinghouse is also the biggest (if not only) supplier of nuclear fuel in the UK. However, the company has declared that its UK fuel delivery operation in this country will not be affected.

India's deal with Westinghouse also seems to have gone sour on both the energy and nuclear weapons font. America is happy to treat India as a trusted client for both technologies.

Meanwhile China's State Power Investment Corp expects one of several AP1000 projects to remain on scheduled completion later this year. China has 'developed' its own CAP1000 and CAP1400 reactors - this may be the final death knell for Westinghouse's long-term in the country.

More than half of global organisations plan to increase energy efficiency spending in the next 12 months according to the Johnson Controls' 2018 Energy Efficiency...

Every facility needs a bit of a spruce-up once in a whaile but would you fancy the job of cleaning Sellafield? A 350 tonne machine has just been installed to tackle one...