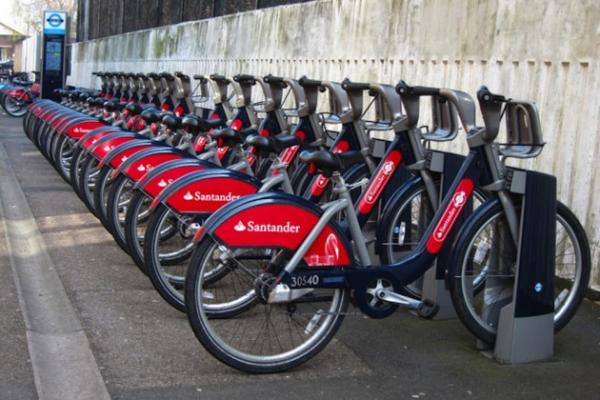 A new 'Boris Bike' maintenance contract with Serco calls for the creation of a lighter, more comfortable and more manoeuvrable bike. Serco will continue to maintain and distribute the fleet of Santander sponsored cycles until 2022.

No name for this game

Sadiq Khan, the man who took over from Boris Johnson as London Mayor but who will never get his moniker attached to London's on-demand cycle hire network (sponsored by Santander who replace Barclays), has welcomed Transport for London signing a deal that will bring an upgraded UK-manufactured bike to the capital’s streets.

TfL has awarded Serco a new five year contract to distribute and maintain the popular hire scheme. This includes the manufacture of an upgraded bike, which will be made by British company Pashley Cycles at its factory in Stratford-upon-Avon.

This next generation bike will be lighter and more manoeuvrable with smaller wheels, a lower frame, a new gear hub and a more comfortable seat. It is anticipated that they will be on the streets in 2018, with around 500 supplied each year to replace older models.

Rupert Soames, Serco Group Chief Executive, said: “This is fantastic news and as a regular user of Santander Cycles I am really excited that we have the opportunity to help continue to provide this iconic service for London’s residents and visitors."

Steven Bell, Pashley’s General Manager, said: “Although we are still in the product development stage, our Research and Development team’s design has been selected by TfL as one that meets its requirements. We will now work hard to turn that design into a production ready bike to bring to London’s streets.”

Customers will then be able to use a single log-in to see all of their TfL travel history. The integration will also pave the way for future discounts on cycle hire charges for customers who have reached a daily caps after travelling on other TfL services.

The value of the TfL contract with Serco is approximately £79.7m.

Picture: Boris Bikes will be lighter and more comfortable from 2018

Ticket to Ride Without a Care

The government has this week (ending October 13) set out details of its £80 million programme to introduce smart ticketing across England and Wales by the end of...