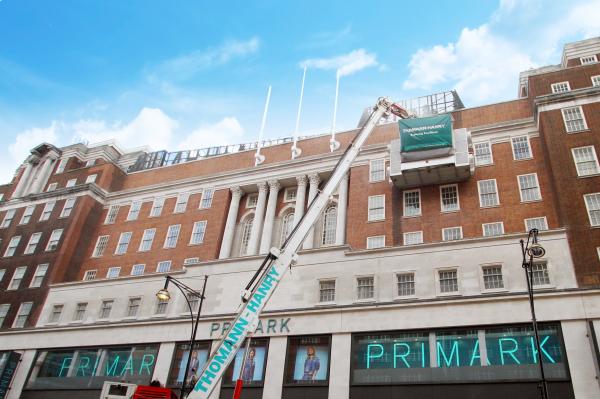 If the London shoppers heading to Oxford Street’s Primark had looked up from their mobile phones for just a minute, they might have noticed the tired West End building has had a facelift.

Thomann-Hanry specialises in cleaning the exterior of stone buildings without the use of scaffold using a technique known as ‘façade gommage’. The firm’s global portfolio includes works on Le Louvre in Paris, the Kremlin in Moscow; the Bank of England and The Ritz Hotel, in London.

This month they went obviously went downmarket as thy transformed the façade of Primark’s flagship store. Shoppers were still able to carry on buying with minimum disruption. Phew – what a relief to the trackuitted hordes.

Mark Styles, at Thomann-Hanry said: “The huge benefit of our exterior cleaning system to retailers is that we don’t use scaffold to get the job done.  Business can carry on as normal so trade is not affected whilst works take place. Primark was cleaned in just 10 working days.”

A cleaning operative works from a vacuum cabin attached to an arm mounted on a specially adapted truck. The cabin runs up and down the side of the building, gently removing dirt until the entire façade is cleaned. Ultra-fine powder is projected under low pressure onto the surface and removes accumulated pollution deposits without affecting the masonry beneath. No water or chemicals are used in the process and all dirt and spent powder is captured within the cabin and removed for recycling.

Picture: Once cleaned, the restoration team completed Primark’s transformation by restoring and painting the windows.

Premier Technical Services Group PLC (PTSG) has set to work on a challenging clean of a large residential development in Sheffield, thanks to the collaboration between...

A Canadian led study has found that urban grime has a tendency to release air pollutants when exposed to sunlight. Claiming to be ground breaking in its findings,...