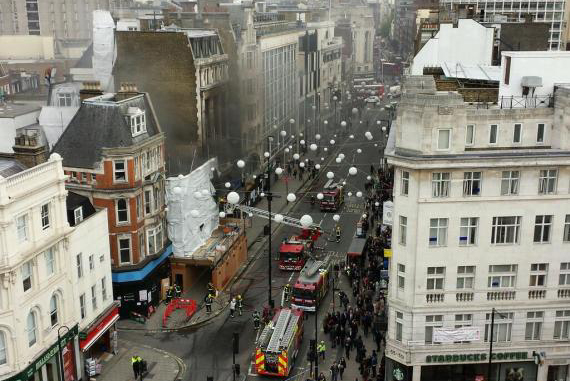 Fire on Oxford Street picture with thanks to Twitter Mo

Firefighters tackled a fire in a building undergoing refurbishment on London’s famous shopping thoroughfare, Oxford Street, this morning. Part of the first floor was damaged and crews worked hard to bring the blaze quickly under control.

Station Manager Sam Kazmanli, who was at the scene said:

"Firefighters contained the fire to the first floor of the building under refurbishment. We re-opened Oxford Street to traffic as quickly as possible."

Four fire engines rushed to the scene with 21 firefighters and officers from Soho, Euston, Clerkenwell, and Knightsbridge fire stations.

The LFB was called at 11:01 and the fire was under control at 12:08. The cause of the fire is under investigation.

As reported on ThisWeekinFM last week - Urgent Warning Fire Strikes Tonight - UK fire services have engaging in selective strikes. Last weekend fire fighters attended a fire at a tyre tip in Deptford London but left the scene at the prescribed time of the start of the strike. The teams involved had ensured the blaze was under control before handing over to contingency firefighters. They returned once the strike was over to put the fire out.

The fire occurred in 2007 and the store, if not the chain, was subsequently accused of having inadequate emergency exits and poor staff training. Judge Geoffrey Rivlin QC said at the trial that it could have led to a ‘disaster almost too awful to contemplate’.

On the 7 March 2012 the London Fire Brigade reacted when a hoarding on Oxford Street collapsed. Three fire engines, four fire rescue units and around 40 firefighters, along with the police and ambulance services also arrived.