Passage to India in Paris 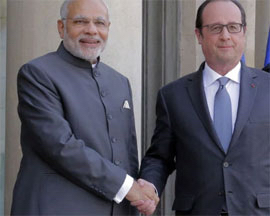 The International Solar Alliance has been launched by Prime Minister Modi and President François Hollande of France at the climate change conference in Paris.

Although the Indian Prime Minister and French President have given their formal approval for the launch, it comes against the background of the critical COP21 UN climate negotiations and whether the full potential of solar energy will be grasped at the event by the world’s leaders.

“We commend Prime Minister Modi and India as a whole for spearheading this collaborative initiative which recognises solar as a key solution to fight climate change whilst providing clean and affordable energy to millions of people,” said James Watson, CEO of Solar Power Europe, who is attending the launch. “We wish the International Solar Alliance (ISA) a fruitful two weeks in Paris and look forward to future cooperation.”

The scale of potential global opportunities in the solar market for the UK was recently illustrated by domestic solar company Lightsource Renewable Energy agreeing a £2 billion investment plan in India to build over 3GW of solar electricity infrastructure through a partnership with Srei Infrastructure Finance. British Solar Renewables, another UK solar company, has already expanded its business into India which is aiming to install 100GW of solar power in the next five to seven years.

However, only a handful of the largest UK solar companies are in a position to take advantage of the massive international opportunities in solar which will be boosted by the International Solar Alliance launched today. Barclay’s analysts predict a US$30trillion boom in new technology and renewables investment to 2040 with the dropping cost of renewable (in particular solar power) ‘changing everything’.

The solar PV sector expects that critical decisions on the fate of the solar Feed-in Tariff (FiT) in the UK could come within days of the end of the Paris conference.

Most British solar companies have been arguing that they require a few more years of stable support to reach competitiveness but are now faced with uncertainty. The UK government has proposed spending £7million to support the country’s solar industry over the next three years, despite international momentum growing strongly behind the technology.

A survey published by the Solar Trade Association (STA) shows that a further 576 jobs have been lost in smaller firms across the UK, bringing the total of redundancies due to the proposed cuts to 1,800.

“The UK will pay a very heavy price in lost economic opportunities if we marginalise ourselves from the extraordinary global rise of solar power,” warned Leonie Greene, Head of External Affairs STA. “Solar markets are expected to accelerate after the Paris climate conference as strengthened international commitments give clearer signals to investors.”

Mr Greene noted that while Prime Minister Cameron had expressed support for Modi’s new solar alliance, it would ring hollow if the government abandons the technology in the UK. “We hope he will see how prominent solar power is as a solution to climate change at the Paris conference and act quickly to secure British solar power on his return,” concluded Mr Greene.

Picture: The International Solar Alliance was launched at the Paris climate control conference this week with the official blessing of Prime Minister Modi for India and the French President, François Hollande