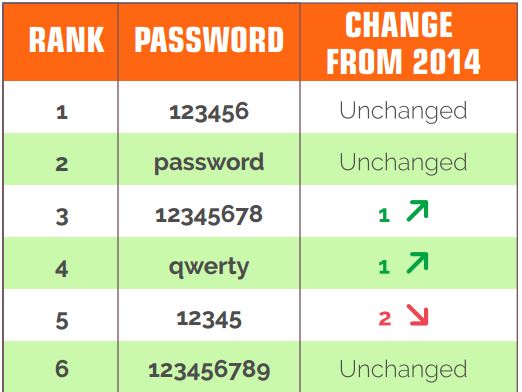 SplashData has announced the 2015 edition of its annual Worst Passwords List highlighting the insecure password habits of Internet users. '123456' and 'password' once again reign supreme as the most commonly used passwords, as they have since SplashData’s first list in 2011, demonstrating how people’s choices for passwords remain consistently risky.

In SplashData’s fifth annual report, compiled from more than 2 million leaked passwords during the year, some new and longer passwords made their debut – perhaps showing an effort by both websites and web users to be more secure. However, the longer passwords are so simple as to make their extra length virtually worthless as a security measure.

"We have seen an effort by many people to be more secure by adding characters to passwords but if these longer passwords are based on simple patterns they will put you in just as much risk of having your identity stolen by hackers," said Morgan Slain, CEO of SplashData.

As in past years’ lists, simple numerical passwords remain common, with six of the top 10 passwords on the 2015 list comprised of numbers only.

When it comes to movies and pop culture, The Force may be able to protect the Jedi but it won’t secure users who choose popular Star Wars terms such as 'starwars,' 'solo,' and 'princess' as their passwords. All three terms are new entries on this year’s list.

Click Here to download the eBook, Worst Passwords: What We Have Learned From Five Years of Studying the Internet’s Most Commonly Used Passwords

Richardson Eyres has launched The Unfortunate Demise and Rebirth of Data Dave which is a short video that follows the lovable and wildly unlucky Data Dave who, despite...

The Drive to Destruction

Old and disused data devices - hard drives, USBs, tablets, PDAs – can be sent through the post or by tracked courier, to Send & Destroy’s Hampshire-based...

Vulnerable PDF readers are the primary cause of risk exposure on UK PCs according to the latest Secunia Quarterly Country Report. The international supplier of...

Getting the Better of Spams

According to Mailprotector, the Cloud-based e-mail security, management and hosting specialist, the number one spam subject is the simple one-word 'Hi!' closely...

Looking for the Weakest Link

It may be difficult to accept but when it comes to IT security the workforce can be leaking vital information. The warning comes from Wick Hill Group, specialist in...

Productivity, Wellbeing, Agile Working - It's Time For The Talking To Stop

Can we really design our workplaces for better behaviours? asks Luis De Souza. I’ve studied the evolution of the workplace for many years – and...