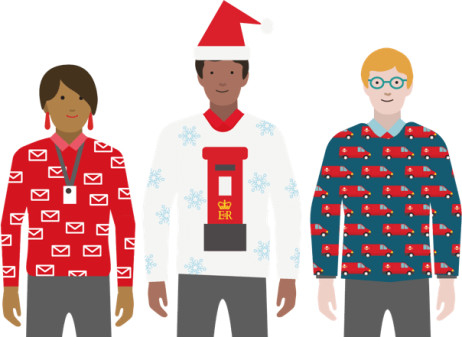 As the Christmas season approaches, anyone responsible for a post room will want to know about posing dates for Christmas.

Royal Mail have published their latest recommended posting dates. Here are the latest posting dates for the UK:

To find out the last International posting dates visit

With thanks to Royal Mail and Neopost

Brits spend £2.3 billion a year on Christmas trees and decorations.

500 lights are used on Trafalgar Square’s Christmas tree but 3.3 million light up the tree in Rio de Janeiro.

The most popular Christmas tree in British homes is the Nordmann fir.

A freshly cut Christmas tree should last up to 4 weeks.

The best time to put up a freshly cut Christmas tree is between the 1st and 11th of December.

If a Christmas tree is not taken down by the 5th of January it’s considered bad luck in the UK.

Many stores’ fastest available delivery slot is still only the next working day, such as Urban Outfitters and Dell. That means the final date to buy an item online and have it delivered is Thursday 21st December. For shoppers holding their head in the sand until the last possible moment, that could be a nasty shock. And some stores’ final order deadline is even earlier, with Harvey Nichols and Liberty saying their final date is Wednesday 20th.

Compounding the problem Royal Mail won’t be delivering on Christmas Eve, Christmas Day or Boxing Day, leading to a potential logjam for those retailers who still use Royal Mail to deliver their orders.

Amazon and Argos are once more battling it out to offer the last possible shopping date and time. Argos is currently saying it can deliver orders taken at 1:00pm Christmas Eve before Christmas Day; and this year Curry’s/PC World has joined the last-minute race with a 1:00pm Christmas Eve deadline as well. But the winner looks like being Amazon, which is taking Christmas Eve deliveries right until 9.45pm for those living in some Amazon Prime Now service areas.

Dentists have created the perfect shopping list to keep teeth happy this Christmas.

Mince pies, selection boxes and champagne are sure to become diet staples as the festive season gets underway, with normal health routines often taking a back seat.

To cut down on the sweet stuff, choose Waitrose all butter mince pies which contain 11.5g of sugar per pie, compared to over double in Sainsbury’s (24.8g) and Tesco’s (20.5g) treats.

Chocolate and biscuit selection boxes are another essential part of getting in to the holiday spirit, but with the likes of Quality Street, Cadbury Hero’s and Chocolate Oranges containing over 58g of sugar, try opting for Ferrero Rocher or Lindt to almost half your sugar intake, down to 39g.

Ditching the chocolate biscuits in favour of festive shortbread is another way to give teeth a break, with Walker’s shortbread containing just 11.3g of sugar, compared to the 38g in Fox’s famous Christmas selection.

When it comes to the big day itself, hidden sugars in cranberry sauce and honey roast hams, not only rack up the calories, but also put teeth under attack for up to up to an hour after eating. If turkey without cranberry sauce is hard to imagine, choose Coleman’s version for just 4.1g of sugar per tablespoon, compared to well over double found in the ASDA (13g) and Sainsbury’s (10.9g) equivalent.

Further tips to minimise damage to teeth this Christmas includes choosing Asda for Christmas cake, for 32g of sugar, compared to the 41.8g found in Tesco’s version. To slash sugar even further, opt for a non-iced cake such as the Waitrose non-iced rich fruit Christmas cake, which has just 24g.

ASDA is also the recommended place to pick up Christmas pudding, as it contains 40g of sugar, compared to the 52g or 49g from Morrisons and Iceland respectively.

While Tesco doesn’t fair favourably for Christmas cake, it is the place to shop for traditional German stollen cake, as its Finest range contains just 11.5g of sugar, compared to the 20.8g found in Morrison’s range.

Trifle, Panettone, and bucks fizz are just a few of the other indulgences to satisfy millions after the main meal. While opting for a smaller portion is advice many struggle to stick to, simply shopping at the right place could drastically reduce damage to teeth

With thanks to White Glo - toothpaste.

Picture: Jumper to it - Royal Mail have published their latest recommended posting dates

Under Pressure & How's Your Heart?

As many as 7 million people in the UK are living undiagnosed and therefore unaware that they are at risk of high blood pressure – often called the silent...

Award for Health and Wellbeing