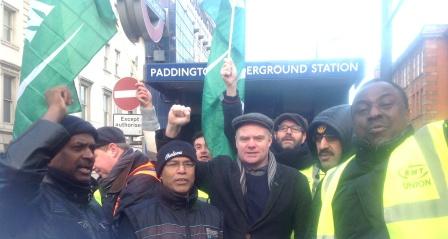 Members of the National Union of Rail, Maritime and Transport Workers (UK) – or RMT – working for Mitie on the First Great Western at Paddington and Old Oak Common (operated by the First Group) have ended strike action that started on Sunday. The unions claim the workers are ‘fighting for the London Living Wage and workplace justice’.

This followed similar industrial action just Christmas. Mitie had tabled a new offer which did not meet a London Living Wage.

Bob Crow RMT General Secretary said: “Mitie are key players in the driving down on wages and working conditions for some of the lowest paid workers in Britain. The long-running battle for pay and workplace justice by the RMT Mitie cleaners on the Great Western franchise has become a set-piece confrontation with national implications in the wider struggle between low-paid workers and the cheapskate, facilities and outsource operations that this Government promotes at every opportunity.”