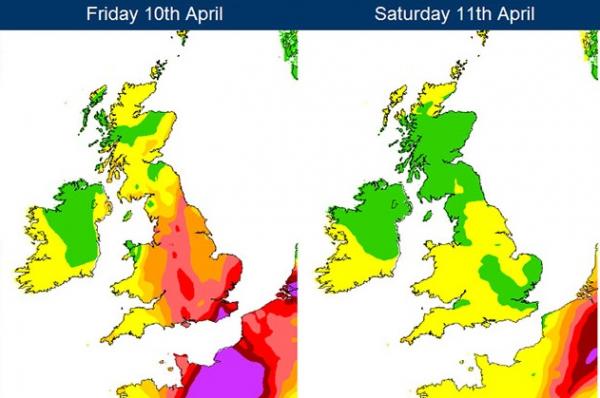 As reported in the national media, today is expected to see the highest levels of atmospheric pollution affect large parts of the country. DEFRA was aware of the potential for a 'perfect storm' at the beginning of the week...and the potential for respiratory irritation

Yesterday, Thursday 9 April, the Department for Environment, Food & Rural Affairs published its first high pollution warning which has been updated this morning. DEFRA was aware of the potential for a 'perfect storm' at the beginning of the week.

Levels of air pollution are forecast to become high in many areas of central, eastern and northern England, with locally very high levels forecast for a time in the far southeast of England. This is due to a combination of pollutants trapped near the ground, a light southeasterly flow bringing additional pollutants from the continent and in addition, a small amount of Saharan dust in the air. Across the rest of the United Kingdom, levels of air pollution are expected to be mainly moderate.

During Saturday, clearer Atlantic air will spread from the northwest across all areas, bringing air pollution levels down to moderate or low during Saturday and mainly low with isolated moderate levels for Sunday and Monday.

The air pollution forecast and health advice was issued for the week starting 6 April 2015 and indicated early that air pollution levels were expected to rise over five days, with isolated highs possible in localised areas on Thursday and high or very high levels for Friday. This is due to locally generated particulate matter combining with pollution blown in from the near continent - and a contribution from Saharan dust.

Dr Sotiris Vardoulakis, head of the air pollution and climate change group at PHE’s Centre for Radiation, Chemical and Environmental Hazards said: "PHE provides advice to Defra on the health effects of air pollution. While most people will not be affected by short-term peaks in air pollution, some individuals, particularly those with existing heart or lung conditions, may experience increased symptoms.

"On occasions where levels are high, adults and children with lung problems and adults with heart problems, should reduce strenuous physical exertion, particularly outdoors, particularly if they experience symptoms. People with asthma may find they need to use their reliever inhaler more often. Older people should also reduce physical exertion. Anyone experiencing discomfort such as sore eyes, cough or sore throat should consider reducing activity, particularly outdoors."