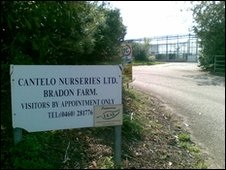 A horticultural company has been fined after a worker died and three others were seriously injured in an explosion while emptying a pressurised tank used to heat greenhouses.

Peter James, aged 67 of Southmead Terrace, Crewkerne, died of head injuries six days after the incident. Two of his workmates had been asked to open the tank in preparation for upgrading work at a nursery at Bradon Farm, Isle Abbots, near Taunton on 11 May 2010.

The incident was investigated by the Health and Safety Executive (HSE), which prosecuted Mr James’ employer, Cantelo Nurseries, at Taunton Crown Court.

The court heard that two workers were asked to unbolt a hatch cover from a pressure vessel while there was still pressure in the system. This caused a devastating release of pressure that sent the hatch cover flying across the room, followed by a large jet of water that swept everyone off their feet.

In addition to Mr James’s fatal injuries, the three other men standing nearby suffered severe injuries. Arek Kuchczynski, aged 29, was unconscious for two weeks following the incident and remained in hospital for many months after suffering injuries to his head and skull and damage to his forearm, requiring three operations and a skin graft.

Roger Mees, a 43 year old horticultural manager, suffered serious trauma to his head including a broken jaw, heavy bruising to his face, damage to his teeth, a cut across the nose, black eyes and a two-inch deep cut to his lip. Horticultural technician Radoslau Dimitov, aged 25, also suffered a fractured arm.

HSE’s investigation found that the work was not properly planned, that workers had not been properly trained or supervised, and that at least one of them spoke very little English, which made it difficult to understand instructions. The court was told the hatch should not have been removed until all the pressure had been safely released from the system.

Cantelo Nurseries pleaded guilty to two breaches of health and safety legislation and was fined a total of £80,000 and ordered to pay £59,812 in costs.

“This tragic incident has cost one man his life and changed the lives of many other people forever,” stated Christine Haberfield, HSE Inspector, speaking after the hearing. “There were simple, sensible and proportionate steps, such as releasing the pressure in the tanks, that could – and should – have been taken to do the work safely.”

Ms Haberfield insisted that all that was needed was a little thought beforehand to ensure that the work was properly planned, carried out by competent people and supervised. Had this been done, she believed the this could have been avoided.

“All employers must ensure any task of this nature, indeed any maintenance or repair task, is properly planned and considered to ensure that sensible precautions can be taken. That includes ensuring all sources of energy are isolated before work begins.”

Pictured: Cantelo Nurseries, Somerset, where one man died and three others were injured

One of the UK’s biggest gas distributers has been sentenced after admitting safety failings in relation to the death of a young boy. On 24 April 2014,...

One Firm Fined, Another Ducks 'Justice'