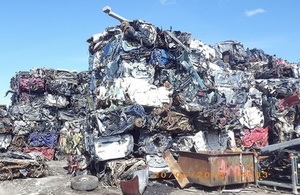 During 2016, almost £220,000 in fines and costs were imposed by courts following Environment Agency investigations in the North-East.

There were 25 prosecutions of individuals or companies for waste offences, amounting to total fines of £93,390 and costs of £109,683.

There were also three custodial sentences, two suspended sentences, a curfew, community orders and two formal cautions, as well as compensation awarded to a landowner who had to clear illegally dumped waste.

Jamie Fletcher, Environment Manager at the Environment Agency in the North-East, said: "Waste crime can cause serious pollution to the environment, puts communities at risk and undermines legitimate businesses, impacting on investment and economic growth. We have specialist teams that work hard to target those suspected of being involved in illegal activity and to ensure any necessary action is taken against them."

Hunter had denied two environmental offences but was found guilty after a trial.

Lorna Matchett, prosecuting for the Environment Agency, told the court that investigating officers discovered the illegal activities in July 2014.

Hunter had been storing waste on land near Bridge Road, near the River Calder behind the Horbury Bridge Industrial Estate, although no environmental permits were in place for the operation. There were several piles of mixed waste (containing treated and untreated wood waste and plastics) and skips belonging to the Hunter Group or Huddersfield Skip Services, both of which were Hunter was involved with at the time.

The defendant claimed that these waste activities were allowed because they were covered by waste permitting exemptions. But the Environment Agency said the waste was being stored in breach of the exemptions: there was too much waste, it was of a type not compliant with the exemptions and it was stored for too long.

Hunter was told to clear the waste from the site but inspections between October 2014 and January 2015 revealed that much of it remained. There were also signs that waste had been deposited into the ground, which was contaminated with plastic, glass, a trainer and mixed construction and demolition waste.

The court heard that through running the site illegally, Hunter avoided £4,120 in permitting fees and £5,148 by not installing the correct surfacing to prevent pollution to the ground. It is estimated that Hunter received between £6,400 and £18,720 for the waste he brought onto the site.

In sentencing, the chair of the bench said: "These offences were so serious that custody was the only option."

A spokesperson for the Environment Agency said after the hearing: "Environmental permitting regulations exist to protect the environment and local communities from the risk of harm. Hunter’s activities on this site posed a pollution risk and a fire risk that could have affected the nearby railway line. Hunter also undercut legitimate businesses by avoiding mandatory permitting and infrastructure costs.

In addition to the suspended jail term, Hunter was ordered to undertake a rehabilitation activity of 15 days under supervision, and to carry out 300 hours of unpaid work within the next 12 months. Hunter must also pay legal costs of £4,640 and a victim surcharge of £150.

Waste operator Colin Barnes has been given six months by the courts to clear his illegally operated waste site in Dereham. He had previously failed to clear the site ahead of the court hearing on Wednesday 25 January after his environmental permit was revoked.

Barnes, who traded as CT Barnes Autos, was taken to court by the Environment Agency after failed attempts to get him to comply with the law. King’s Lynn magistrates deferred sentencing him and have given him six months to clear the site. He is due back in the court on 26 July.

The permit held by Barnes, aged 59, was revoked by the Environment Agency after he continually failed to run the site in line with the conditions in his permit. Following the revocation Barnes was required to remove the large amounts of waste remaining on site.

Mrs Megan Selves, prosecuting, said the deadline for removing all the waste was extended three times to dates suggested by the defendant, as waste officers tried to support him to do the right thing. But despite removing some of the waste, most of it remained two years later. She told the court that Barnes had an environment permit to store waste vehicles and parts but it was revoked on 15 September 2014. All the waste should have been removed by 3 November 2014.

Magistrates heard that Barnes had operated the site since 1977 as a vehicle repair and service business until 2006 when he obtained a permit and began depolluting and dismantling vehicles which had come to the end of their lives.

Barnes told investigating officers that since the revocation he had been removing some of the waste but had to rely on others as he did not have a waste carrier's licence at the time and they sometimes took a long time to collect it as the value of the waste had decreased.

After the hearing Environment Agency officer Rob Brodie said: "Unregulated waste activities can impact both visual and amenity and can cause harm to the environment and human health. These offences were committed over 21 months and despite advice and guidance from us and agreements to extend deadlines for the removal of waste, very little of it was removed."

Mrs Selves said Barnes had a history of non-compliance with warnings from the Environment Agency and has previous convictions for similar environmental offences.

Picture: A clampdown on illegal waste sites has seen fines and even prison sentences