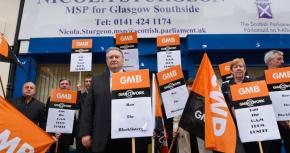 Paul Kenny, GMB General Secretary, delivered a letter by hand on 16 September to the Glasgow constituency office of Nichola Sturgeon, Deputy First Minister who is responsible for procurement for Scottish Government, during a protest over the SNP led Dundee City Council naming BAM Construction as the recommended preferred bidder for the £45m tender to build Victoria and Albert Museum of Design before BAM has compensated construction workers it blacklisted.

GMB is requesting that Nicola Sturgeon and First Minister Alex Salmond intervene, and reverse the decision of Dundee City Council in line with the stated policy of the Scottish Government.

The GMB union says it is ‘bitterly disappointed’ that the Scottish National Party (SNP) led Dundee City Council has voted to name BAM Construction as the recommended preferred bidder for the tender to build the Victoria and Albert (V&A) Museum of Design Dundee before the company, along with others, had compensated the 582 construction workers blacklisted - 21 of which had worked in Dundee. (See history of blacklisting below.)

A recent letter from the SNP Scottish government on new guidelines on blacklisting, in relation to public sector contracts, had stated that the ‘guidance makes it clear that firms which have engaged in blacklisting have committed an act of grave professional misconduct and should be excluded from public procurement, unless they can demonstrate appropriate remedial action’.

It is alleged that neither BAM, Carillion, nor other firms that blacklisted workers, have yet paid any compensation and GMB and the Scottish Labour Party have argued that under these guidelines, the companies should be excluded from public procurement until they do. The eight construction employers are Balfour Beatty, Carillion, Costain, Kier, Laing O’Rourke, Sir Robert McAlpine, Skanska UK and VINCI plc. Evidence submitted to the High Court alleges that BAM firms had placed at least 34 workers names on the blacklist.

"This is a shameful decision by a shoddy alliance between nationalists and Tories,” stated Harry Donaldson, Secretary GMB Scotland speaking at the TUC Congress in Liverpool. “When it comes to action, not words, the SNP has been found out. They had to choose sides and last night in Dundee once again they choose the wrong one.”

For its part, BAM Construction chose to ignore union objections in speaking about its role in the Dundee decision. “This is a project of international significance and it is great to hear that we have been recommended as the preferred main contractor,” said Douglas Keillor, Regional Director, BAM Construction in Scotland.

Pictured: The V&A Museum of Design Dundee is providing the backdrop to a dispute between GMB Scotland and BAM Construction