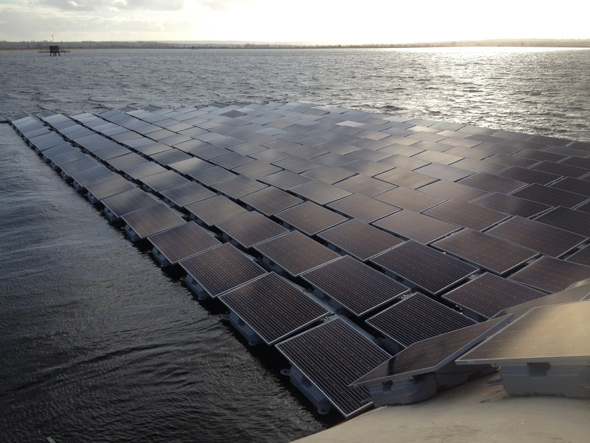 Europe’s biggest ever floating solar panel array is being installed on London’s Queen Elizabeth II reservoir as part of Thames Water’s ambitious bid to self-generate a third of its own energy by 2020.

Just over 23,000 solar photovoltaic (PV) panels will be floated on the reservoir near Walton-on-Thames, utilising a normally redundant suburban space on the surface, following an agreement between Thames Water, Ennoviga Solar and Lightsource Renewable Energy.

The floating pontoon will cover around a tenth of the reservoir – enough to fill eight Wembley football pitches.

The low carbon, renewable energy produced will be used to help power the nearby water treatment works putting downward pressure on customer bills[1]. It will have a total installed peak capacity of 6.3 megawatts and is expected to generate 5.8 million kilowatt hours in its first year – equivalent to the annual consumption of around 1,800 homes.

Lightsource will oversee the deployment of more than 61,000 floats and 177 anchors, which will provide the floating platform for the solar array.

Eva Pauly, International Business Development Director at Ciel et Terre International, the manufacturer of the floating mounting system, said: “This is our largest project outside of Japan and the first one with European bank financing, proving that our technology is not only suitable for water utilities but has also been recognised as bankable in Europe as well as Asia.”

As well as setting a target of generating 33% of its own renewable energy by 2020, Thames Water is striving to become more efficient to reduce its reliance on the grid. It generated a total of 12.5% of its electricity requirements from renewable sources in 2014/2015, which is a 4% increase on the year before. In 2015, Thames Water pledged to support the objectives of the Paris Agreement to limit the global temperature rise to less than 2 degrees Celsius and this project will contribute to achieving this goal.