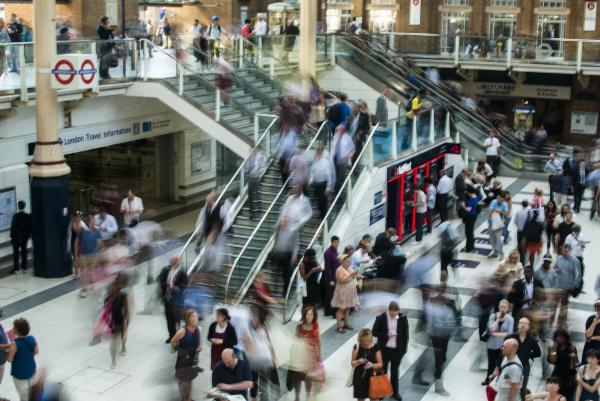 After the recent rail disruption with more to come, Graham Bird explores the effects of a daily commute and explains how the rush-hour race can be reduced.  .

With over 24 million regular commuters making an average daily journey of 56 minutes per day - and as many as 3.4 million travelling for two hours or even longer - it’s safe to say, that many of us are subject to the perils of the daily commute. But, whilst we dutifully continue with these routine treks to and from the workplace, many of us are unaware of the true extent to which these excursions have a negative impact on our health, productivity and finances.

With the average UK employee spending £146 a month on commuting, the cost of this travel will amount to around £135,871 in a lifetime. Unfortunately, if you work in London it’s even worse news, as you'll be paying almost double per mile to get to work – (47p v 24p, to be exact). In fact, commuting into London is the costliest journey in the UK, with the average person spending £305 a month. This means that by retirement, a London worker could have spent almost £200,000 on their commute – the same as a two-bedroom house on the south coast.

Then there’s the time we waste on our daily commutes. A UK worker will spend as many as 400 days of their lives commuting  - which is particularly depressing when you consider that the average person will only spend 115 days of their lives laughing!

Whilst the financial costs and time consumption associated with commuting are concerning, the costs to physical and mental wellbeing are even more alarming. Long hours of commuting, especially by car, are associated with a number of problems. High blood pressure and musculoskeletal disorders affect our physical selves and people who have a long commute are more likely to suffer more anger and resentment at work, absenteeism, lateness and suffer from a lack of concentration. Long commutes have also been shown to increase the risk of heart attacks, flu and depression.

So, it’s clear long commutes are costing us and the economy a pretty penny and influencing our mental and physical health. So, what can we do to combat the commute as both individuals and employers?

Many companies are acknowledging the damage that long commutes can have and in response they have started allowing employees to work from home a few days a month, or more, to reduce the daily grind and associated stress of getting into work. Whist it may not be possible for an employee to work from home every day, one or two days per week are likely to do much more good than harm.

Many companies are also seeing the move towards flexible working practices. If some staff are unable to work from home, employers can instead consider allowing staff to arrive in work after the morning rush hour and stay a little later into the early evening. For many, a change to say, a day of 10am – 6pm or 11am – 7pm can cut many minutes, even hours of the equivalent 9-5 day in terms of commuting time. The cost of rail travel may also be reduced if employees travel outside of peak travel times.

Avoiding peak traffic times might also reduce commute time and costs or even make it easier to consider alternatives such as walking or cycling to work.

A number of companies are providing their employees with corporate gym memberships or even installing gyms in their premises. This means staff can work out immediately before or after work, or at a time within their working day. It is much easier to motivate yourself to go to the gym when it's on the doorstep of work, than it is after an hour on a cramped train getting out of London and using that time means you avoid the general rush.

So, in summary - living in a society where commuting becomes a thing of the past may be impossible. However, both employers and workers can make certain changes to promote alternative arrangements, wherever possible, to lessen the social and physical and mental impacts that long commutes to and from work can cause.

Graham Bird is a Director of workplace consultancy, Where We Work www.Wherewework.space

Managing Flexible Working Requests – What is the Current Law?

According to several media reports, ministers are preparing to make flexible working a permanent feature of UK life after the pandemic, with plans to strengthen...