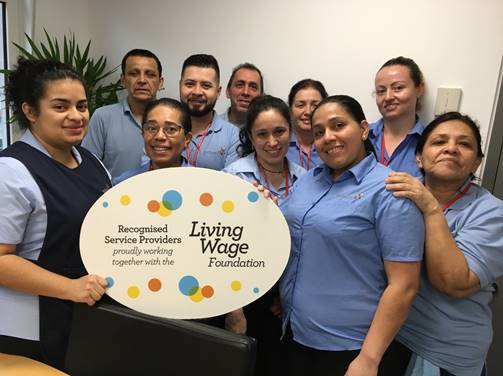 The Awards are sponsored by Aviva, KPMG and the City of London Corporation.

Ending low pay - one contract at a time

The service provider sector is a traditionally low pay industry. However, Living Wage Recognised Service Providers aim to buck this trend by spreading the benefits of the Real Living Wage throughout their contracts. They commit to always supply a Living Wage bid alongside every market rate submittal to clients to champion fair pay within the sector.

Enhance were one of the first cleaning companies to embrace the idea of a fair wage for low paid workers in London. Over the past eight years they have consistently promoted the benefits of paying the Real Living Wage to their clients. The majority of Enhance’s business is within London and 96% of Enhance’s staff, working on client contracts, are paid the London Living Wage or higher.

Sandy Aird, MD of Enhance said: “Paying a Real Living Wage to our staff is a fundamental principle within our business and we owe a huge thank you to our clients for their ongoing support with this policy.”

Tess Lanning, Director of the Living Wage Foundation, said: “Congratulations to Enhance on becoming a Living Wage Champion. Employers like Enhance are leading the way in placing dignity and respect at the heart of their organisation. Over 4,300 employers have now signed up to the movement, and their leadership is making a profound difference to the lives of families and communities across the UK.”

The Living Wage is an hourly pay rate set independently, updated annually, and calculated according to the basic cost of living. Employers choose to pay the Living Wage on a voluntary basis.