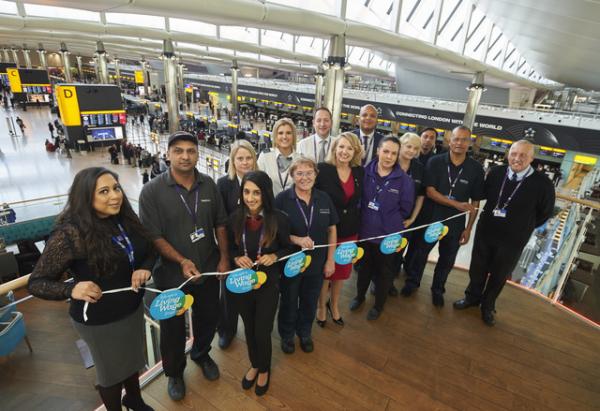 Heathrow will become the first Living Wage Airport. This recognition will see 3,200 airport workers being paid the Real Living Wage by the end of 2020 and includes contractor labour from such firms as Wilson James, Mitie and Omni.

Heathrow was among over 150 employers seeking accreditation in the build up to Living Wage Week (Nov 5-11), including the National Gallery, Somerset House and JLL. They join over 3,600, employers across the UK, including a third of the FTSE 100 and household names such as IKEA, Aviva, Nationwide, Chelsea and Everton Football Clubs and Google, as well as thousands of small businesses, who are choosing to pay the Real Living Wage to ensure all staff, including onsite contractors, earn a wage that meets the real cost of living.

More than 1,000 employers have signed up to pay the Real Living Wage since Living Wage Week last year, including companies as diverse as Lush, Diageo, Landsec, Arriva Rail, Rambert and Slush Puppie.

Living Wage Foundation Director, Katherine Chapman said: “The new Real Living Wage rates will bring relief for thousands of UK workers being squeezed by stagnant wages and rising inflation. It’s thanks to the leadership of over 3,600 employers across the UK who are committed to paying all their staff, including cleaners and security staff, a real Living Wage.

“Heathrow Airport signing up is a major milestone for the Living Wage movement. As the first Living Wage airport, bringing a pay-rise to 3,200 workers, Heathrow sets an example for other major UK employers to follow.

Heathrow CEO John Holland-Kaye said: “Heathrow’s status as a worldclass airport is down to the quality and expertise of our colleagues. We firmly believe that paying the Living Wage is the right thing to do as a responsible employer. It will help us to attract and retain the best people, supporting them in building a rewarding career at Heathrow. We are committed to going further to support responsible employment practices throughout our supply chain.”

All for one - one for all

The airport will also exceed the conditions required for accreditation. This includes phasing out zero hours contracts and demonstrating leadership with other businesses based at the airport by encouraging them to take a similar stance.

In addition to the accreditation requirements, Heathrow has further committed to: