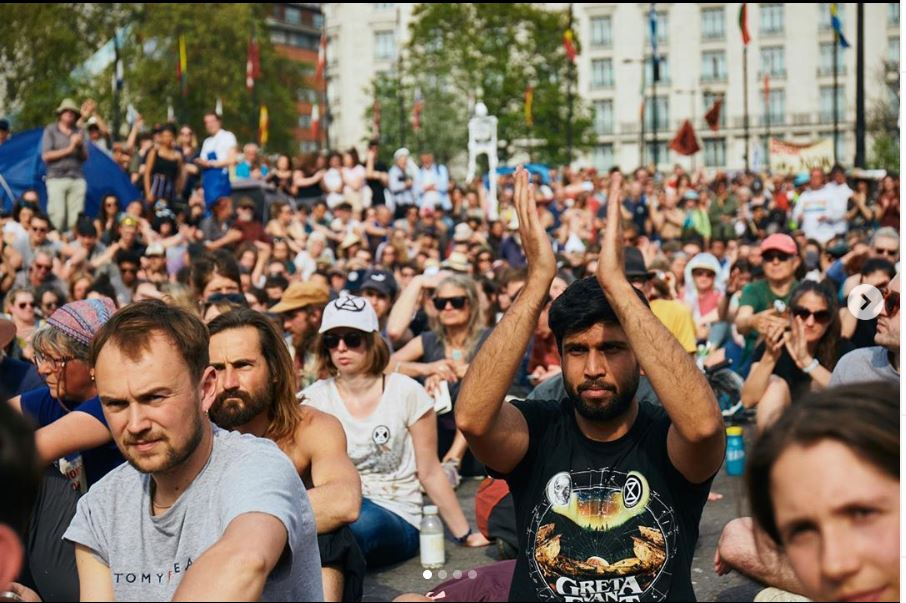 July 15 saw Extinction Rebellion return to British Streets to cause disruption across five UK cities -  Bristol, Cardiff, Glasgow, Leeds and London - with the threat of more to come throughout a 'summer uprising'.

Each city had its protest coordinated by local Extinction Rebellion (XR) branches. The already highly developed organisation has grown exponentially since 'shutting down' London in the spring.

A theme running through the disruption was that each city had its own large, coloured boat painted with the message ‘ACT NOW!’.

Each of the five protests aimed to draw attention to different elements of the 'climate and ecological crisis' -  rising sea levels, floods, wildfires, extreme weather and crop failures taking place around the world.

ER are calling on the Government to halt biodiversity loss and reduce greenhouse gas emissions to net zero by 2025 - instead of 2050 which Theresa May announced in June would be the UK target.

An XR spokesperson said: "Hundreds of ordinary citizens are willing to be arrested by blocking roads, dropping banners, staging die-ins and more to draw attention to the ecological and climate emergency."

Up to 1,000 rebels face prosecution over the April events in London which saw protestors glue themselves to landmarks including the Stock Exchange and vandalise BP's headquarters.

The XR spokesperson continued: "Through a host of non-violent protests, communities around the UK will be coming together to stage a series of creative acts of civil-disobedience – blocking specific locations, bridges and roads – while also holding talks, workshops, family friendly activities, peoples’ assemblies and more". The more includes training of those citizens to avoid arrest, disperse & reassemble and cause as much disruption as possible.

Last spring thousands gathered in cities around the world (most prominently in London) marking the beginning of an 'International Rebellion against government inaction on the climate and ecological emergency'.

8:00am saw things kick off in Glasgow with the local XR branch enticing families to the Trongate area with family-friendly activities including an opportunity to join Wee Rebellion. There was live music and speakers on the topic of climate justice and refugee solidarity claiming floods, hurricanes, food shortages, droughts and resulting conflicts are seeing vast numbers of people displaced and dying.

The Scottish Sun reported: 'They've parked a large purple boat at the intersection between Gallowgate and High Street. The 25ft vessel is currently being manned by campaigners hoping to cause as much disruption as possible. Large letters painted on its side say The Future You Fear Is Already Here'.

9:00am saw London hit with protest marches as a pink boat took centre stage in Oxford Circus with XR's now famous first demand 'Tell The Truth' emblazoned on its side. Four more sailed into the centre of the cities affected, each also carried the message 'Act Now'. From London's West End the protests continued through to the Strand. A separately organised protest on Fleet Street saw protestors stage a die-in outside the Royal Courts of Justice.

Just after 9:00am Bristol Bridge saw over 1,000 people from the South-West converge on what is planned to be five days of action. Rebels will disrupt multiple sites in the city. Tuesday's plan is to disrupt Bristol Council. Wednesday will feature a Critical Mass Bike Ride, which will visit the five areas of the city with the worst air pollution.

The Cardiff National Museum was designated as the meeting place for Welsh rebels to move on from and disrupt the city dressed in yellow to represent the dead canaries coal miners used as an advanced warning of danger.

10:00am saw rebels from across the north of England start their disruption in the heart of Leeds’ financial district, which is the biggest and fastest growing outside London. The protestors wanted to draw attention to the links between banking and the climate and ecological emergency and demand that the finance industry invests in renewable energy and green solutions.

Picture: The Extinction Rebellion in London in April.