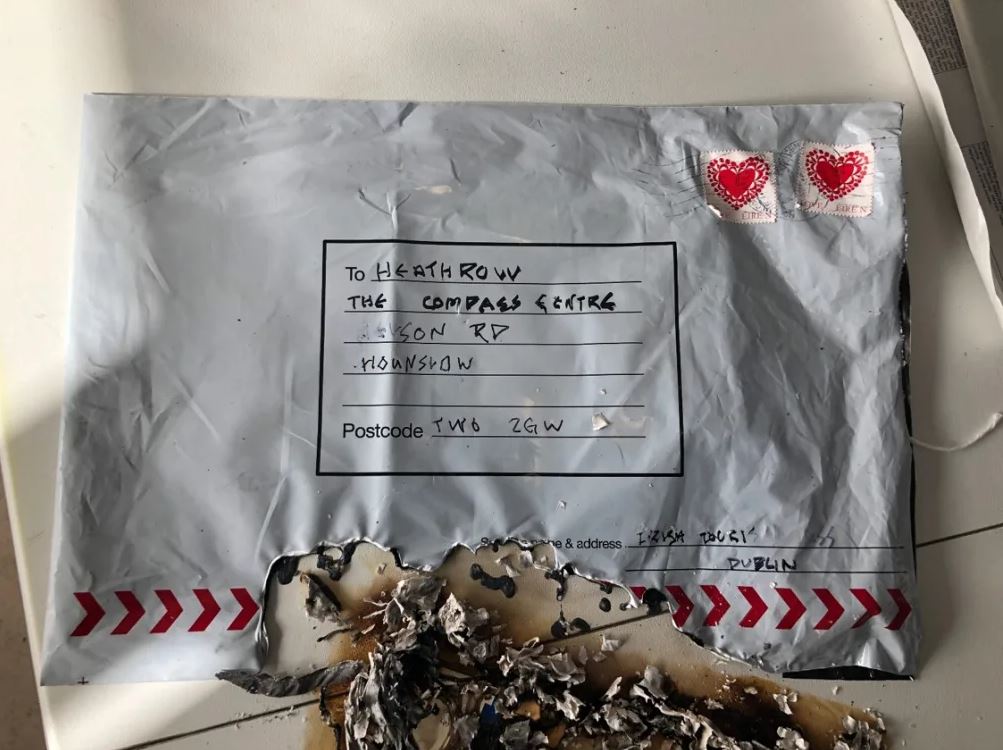 The Met Police Counter Terrorism Command’s investigation into three improvised explosive devices at addresses in London on March 5 is ongoing.

The incidents are being treated as a linked series and investigators are keeping an open mind regarding motives.

Counter Terrorism Command (CTC) have also linked a similar device that was identified at the University of Glasgow on Wednesday March 6.

Staff at three business addresses reported having received suspicious packages. The packages – all A4-sized white postal bags containing yellow Jiffy bags – were assessed by specialist officers to be small improvised explosive devices. These devices, at this early stage of the investigation, appear capable of igniting an initially small fire when opened.

The first call came in to the Met at 9:55am from The Compass Centre in Hounslow (West London, towards Heathrow). The package was opened by staff at the building, causing the device to initiate. This resulted in part of the package burning.

The Compass Centre is not within Heathrow Airport and flights were not affected by this incident.

At 11:40am British Transport Police were called to reports of a suspicious package in the post room at Waterloo Station. The package was not opened. Specialist officers attended and made the device safe. No one was injured.

The station was not evacuated, however cordons were erected in a small area (on Cab Road) outside the station.

Just after midday, police were called to a report of a suspicious package at offices at City Aviation House, Royal Docks, Newham. Staff were evacuated from the building as a precaution. The package was not opened and no one was injured. Specialist officers again were called in and made the device safe. Flights to and from the London City Airport were not affected.

“Our utmost priority is to ensure the safety of the public and staff working with mail, continued Commander Jarrett. "We quickly shared images of the packages with staff at transport hubs and mail handling companies and offices, to aid them in identifying similar packages, however we have not received any further reports.

“We have issued extensive advice to transport hubs and mail sorting companies to be vigilant for and report suspicious packages to police, as always we encourage anyone who sees something suspicious to report it.”

Officers from the British Transport Police were at Waterloo Station for a time to provide reassurance to the public. Met Police Project Servator officers, who carry out operations every day, were also deployed at some transport hubs. The officers are both plain clothes and uniform and are trained to identify tell-tale signs that someone is in an area for terrorist or other criminal purposes.

A similar type of device to those found in London has also been identified at the University of Glasgow (on Wednesday, March 6).

Police Scotland are dealing with the case but officers from both investigation teams are working closely together to share any information or intelligence that could assist their respective inquiries.

Commander Jarrett confirmed: "Due to similarities in the package, its markings and the type of device that was recovered in Glasgow, we are treating it as being linked to the three packages we're investigating in London. We are working very closely with our colleagues from Police Scotland and both investigations are being run in tandem.

A 37-year-old man has been arrested in connection to a suspicious item found in Edinburgh's Annandale Street on Friday March 1. He has been released pending further inquiries and the investigation into this incident is continuing.

A 20-year old man, arrested on suspicion of terrorism offences as part of an investigation by Counter Terrorism Command, continues to be questioned by police. He was arrested at an address in west London on the morning of March 5 under section 41 (1) of the Terrorism Act 2000 and was taken to a south London police station where he remains in police custody. An application was made on March 6 at Westminster Magistrates' Court and a warrant of further detention was granted until March 12.

This arrest is not connected to the investigation into suspicious packages received.

Lewis Ludlow, a Muslim convert and IS supporter who used the name Ali Hussain has been sentenced and will serve a minimum of 15 years for planning a terror attack and to kill hundreds of people in London has been jailed.

Judge Nicholas Hilliard QC said he was satisfied that Ludlow was 'engaged in preparations to launch a spectacular multi victim attack'.

Ludlow had reconnoitred several central London tourist areas and conceived a  plan to drive an explosives laden van at the Disney Store on Oxford Street or perhaps Madame Tussaud's or St Paul's Cathedral.

Ludlow's IS handler was based in the Philippines. Judge Hilliard dismissed any idea that Ludlow had been groomed and his autism and depression were not taken advantage of. "An adherence to violent Jihad was the result of free choices made by you," said the judge.

Ludlow, who had his passport suspended prior to his April 2018 arrest, was under surveillance. Torn-up notes were recovered from his wheelie bin by surveillance officers and were submitted as evidence. A video was shown in court in which Ludlow screamed: "I have nothing for this country of Britain. I spit on your citizenship, your passport, you can go to hell with that."

Apleona has acquired one of the top three integrated facilities management companies in Ireland, Acacia. The global Apleona Group signed the agreement on 14 October...