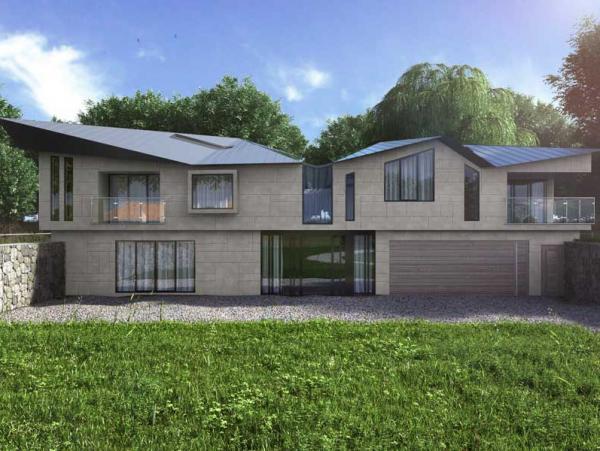 GM Moore & Associates (design, planning and historic consultants) have received planning consent for the conversion of a disused reservoir in Maresfield, Sussex to a bespoke five bedroom dwelling for private clients.

The design is overtly post-modern and seeks to provide a clear statement that the property has industrial roots but takes advantage of today’s broad palette of materials.

The roof form is a geometric interpretation of the low rolling hills associated with the lower Sussex Weald. The roofs will be formed from standing seam profiled zinc and glass.

The walls combine Viroc, a compressed mixture of pinewood and cement, which provides visual interest to the wall cladding. Window and door frames will be dark grey aluminium. Glazing will be triple glazed argon filled low E units.

Floor treatments will include timber, stone and ceramics.

The lower floor will utilise the existing 60cm thick reinforced concrete walls will be retained. The floor above will be formed of 150 mm x 47 mm stud framed walls.

The Local Planning Authority, Wealden District Council, supported the proposal. Support, however, was not forthcoming from the Local Parish Council who voted 3-2 against the application. One Parish Councillor, Mr Ken Ogden, declaring that he was not going to ruin his historic village of Maresfield with proposals such as this. The design had no place in the village; only bricks and clay tiles were appropriate.

Picture: It's a big family home