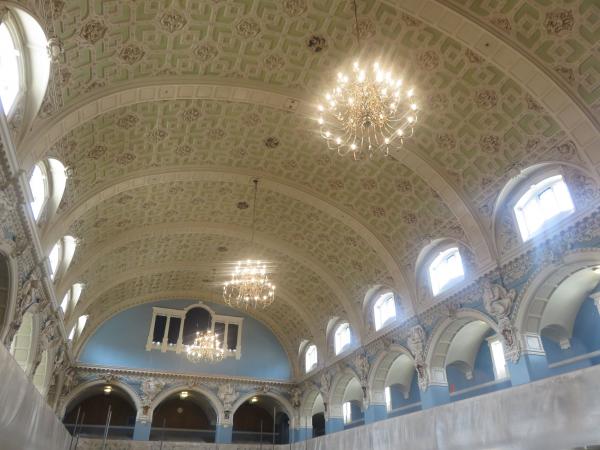 The Town Hall is used for wedding receptions and Council events and was opened in 1897 by the future King Edward VII, boasting advanced heating and lighting systems as well as its spectacular roof.

The complex work which is seeing the restoration of the historic vaulted ceiling, began at the start of last month and initially involved erecting a free-standing scaffold structure, so as not to damage any of the delicate plasterwork on the walls.

Mitie’s team of painters have had to delicately clean the plasterwork to prepare for the specialist priming coating system, clearing away over 30 years of dust and grime. Some of the ornate details on the ceiling and walls required gold paint applied by hand using very small artist type brushes.

All the colours and paint had to be carefully mixed to match existing colours and approved by Oxford City Council’s Conservation Team.

“Oxford Town Hall is one of the most beautiful buildings in the city and is popular with tourists and as a venue for a wide variety of civic, corporate and community events,” explained Richard Clements, Commercial Manager, Oxford Town Hall. “We wanted to preserve the ceiling’s artwork for future generations and spent three years planning the refurbishment and working with our Conservation Team to make sure that it is done to the highest standard.”

The Mitie team recently won the Premier Trophy Award from The Painting & Decorating Association and Painting Contractor of the Year from PPG for its work at The Lyceum Theatre in Sheffield.

Dulux Trade Commercial Colour Consultant, Lisa J Pilley, explores how redecorating the office can help boost the wellbeing of staff as they return to the...