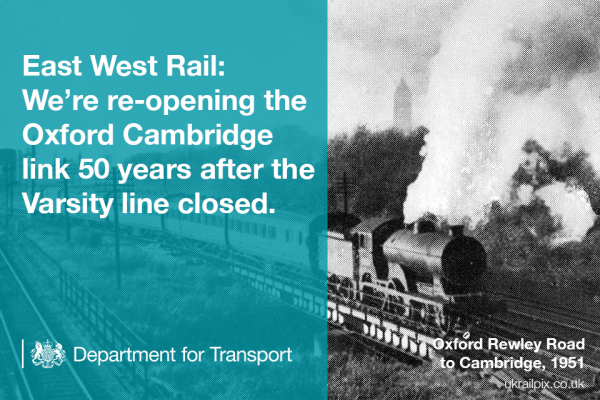 A direct rail link between the university cities of Oxford and Cambridge took a step closer in the week ending December 15 as Transport Secretary Chris Grayling officially launched the East West Railway Company.

East West Railway Company will oversee the restoration of the link between the two academic powerhouses, nearly 50 years since the closure of the old Varsity Line at the historic Second World War site of Bletchley Park.

The Transport Secretary also visited nearby Bletchley Station and Bletchley Viaduct, which are being re-opened as part of the new route. Bletchley Park, so vital in the UK’s Second World War effort, was a key stop on the old Varsity Line and is at the heart of the East West Rail line as it sits halfway between Oxford and Cambridge.

Grayling said: "We are making the biggest investment in the railways since Victorian times to meet the growing demand for rail travel, while also boosting business and increasing productivity.

"East West Rail can revitalise the railways, grow the network and unlock jobs and housing growth. The line will be key to the development of this corridor as a world-class centre for innovation, technology and high-skilled jobs."

The corridor has been dubbed the UK’s own ‘Silicon Valley’ when it is completed in the mid-2020s.

The new line will also create a direct link between East Anglia and central and southern England.

Picture: A train on the old Varsity Line, travelling from Oxford Rewley Road to Cambridge in 1951