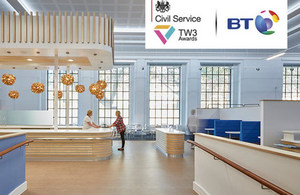 The awards mark the efforts of teams across government who have created smarter ways of working. The programme is coner-stone of efforts in modernising the Civil Service, encouraging innovation, improving the retention of staff, saving money, time and traveland reducing the amount of sick leave.
Projects recognised this year saw staff relocating to state-of-the-art buildings and the reduction in the number of offices needed; along with flexible working practices adopted so staff can work from anywhere with access to the best technology. 'Smart working' strategies such as sharing best practice through blogs, web chats and face-to-face presentationswere also applauded.
Ben Gummer, Minister for the Cabinet Office said: "The Civil Service has some of the most talented people working in the UK and it is right that we provide them with the right environment so that they can serve the public to the best of their abilities. I strongly believe that if we create a good environment in which people can work both efficiently and effectively, they will become more creative problem solvers and provide a better service to the public.
"The TW3 awards are crucial as they showcase the innovative and exciting steps that departments have taken to encourage this creativity. Nominees have implemented the latest and best practices used by the top businesses around the world and show how government can release people’s talents through creating an optimal work environment.
John Manzoni, Chief Executive of the Civil Service said: "The TW3 awards are invaluable for recognising the essential contribution civil servants are making in working smarter across government."

Leadership Award: Home Office - Smarter Working Programme - the Home Office’s Smarter Working Programme led the design of a groundbreaking new office building in Manchester. The building design enabled smarter working by offering staff flexibility in their working arrangements and equipping them with modern technology.
Workspace: Defence Science and Technology Laboratory - Smart Working Team. DSTL won the first ever TW3 Leadership award and this nomination follows on from that pilot. Implementation began in Summer 2016 and aligned with a smart work enabling change project — Future Telephony. It was delivered to time and budget. The project has helped DSTL run more efficiently, use their office space more effectively through the space concept of the 5Cs (Connect, Concentrate, Collaborate, Create, Contain) and also ensured that their people, customers and suppliers are able to work how and where they need to.
Technology: Infrastructure and Projects Authority - Project Delivery Profession Team. Early in 2016, the Project Delivery Profession Team investigated options for a single digital tool to support collaboration among the 10,000 project delivery professionals across central government. It identified a need for a tool that builds relationships across organisational boundaries and allows people to share experience to solve problems. The Government Project Delivery Communitywas created which consists of a collection of self-managed groups that offer digital tools to support collaboration. The groups offer forums, document libraries, wiki pages, polls, event promotion and a people search.
Culture and People: Department for Transport. The Department for Transport recognises the business benefits of smart working and has an ambition to be a smart working leader in the Civil Service. It has launched a focused project to improve smart working, which is owned by senior leaders and is lived by managers and staff throughout the organisation.
One Public Estate: Bristol City Council. Bristol City Council embarked on their Bristol Workplace Programme in July 2013. They recognised that they would not achieve their Service Redesign objectives without changing how, where and when they worked and without embracing investment in new technologies. The council is on track to rationalise their office estate from 38 buildings to two and space per person has reduced from 15m2 to 5m2. With City Hall once regarded as an outdated and inflexible workplace and impenetrable to many citizens of Bristol, the reduced estate is now an effective, elegant and modern expression of the council and its partners’ commitment to serve the City of Bristol.
Judges’ Award: North Yorkshire County Council - Modern Council Programme Team. This year the judges also want to present a special Judges’ Award. This goes to a nominee from a local authority that showed excellence in Technology - North Yorkshire County Council, Modern Council Programme Team. The judges felt that a special award would acknowledge the council’s excellent IT facilities, which were way ahead of the other local government nominations.
Key initiatives included: state of the art self-service systems for staff; mobile technology; Wi-Fi in all buildings; new software that allowed collaborative working and virtual meetings; and training for staff to support these new technologies. Managers, too were empowered by online management processes and interactive dashboards with automated systems.

Picture: The reception and the 2017 awards programme were supported and sponsored by BT as a part of its commitment to smarter working.