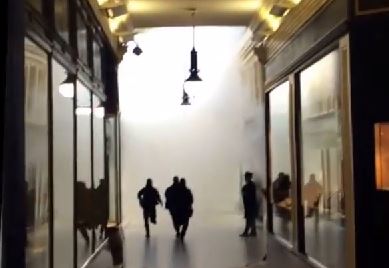 Widely regarded as the Hatton Garden of Scotland, the Argyll Arcade hosts more than 30 jewellers and diamond merchants all under one roof and boasts the largest selection of diamond rings, diamond jewellery, wedding rings and watches in a single location in Scotland It is situated in the heart of Glasgow’s main shopping area. The Arcade offers jewellery for every occasion -  including smash and grab raids.

The raiders came armed with smoke grenades for distraction and cover and hammers and axes to attempt to break windows and threaten the concierge who got in their way this afternoon (Weds 24 Sept). The video footage looks like a scene from Hollywood action movie.

David McCourt who is responsible for the video said: "The gang were carrying weapons and hold-all bags. as they ran from the Arcade. I'm not sure how much they got - but they seemed organised and determined."

The incident was reported to police at 12:20pm. ThisWeekinFM is awaiting further information from the police. However, we believe nobody was injured and the toughened glass of the jewellery stores' frontages withstood the majority of attacks but extensive repairs will be required.